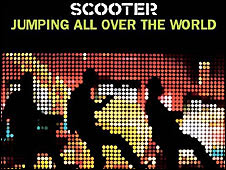 The BBC reports that Scooter have kicked Madonna off the top of the UK album charts. Scooter's new album is called Jumping All Over The World.

The album includes covers of 'Enola Gay' (originally by Orchestral Manoeuvres In The Dark), 'Neverending Story' (originally by Limahl), and a song called 'Marian' which might be a cover of the Sisters of Mercy classic but probably is not. It is not clear whether the title track contains elements from Status Quo's 'Rockin' All Over The World' (itself a cover of a John Fogarty tune, according to Wikipedia). Other tracks include 'The Hardcore Massive', 'The Question Is What Is The Question', and 'Cambodia!'. 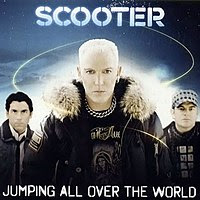 Move Your Ass Poll!! (in which the good folk of ILX discuss the best lines from this most excellent song by Scooter)

The ultimate Scooter quandry... (what it is)

it IS a cover of the sisters song, according to my sources (i am hoping my copy appears in my pile of birthday pressies tomorrow)!!!!!

'it IS a cover of the sisters song'

found it! it's very odd. keep an eye on underseacommunity.com, I'm posting a link ;)

Also, "Cambodia!" must surely be a cover version of the Kim Wilde classic?

I am very proud of that poll. It really gets to the heart of the human condition. Also MOVE.YOUR.ASSSSSSSSSSS

"Whistling Dave" is such a great song title... it's like Scooter are writing songs about the people they keep meeting in clubs.