Please Do Not Kill Us

Al Jazeera workers have started a blog, asking the United States not to drop bombs on them.

Of especial interest are the anonymous comments from mad people.
Posted by ian at 9:18 PM No comments:

I have just discovered that popular band The Jimmycake are actually called The Jimmy Cake. And amazingly, if you do a web search for "Jimmycake", the first thing you find is a thread I started on ILX.
Posted by ian at 10:51 PM No comments:

Or so claims an article triggered by some shite Rowan Atkinson film.
Posted by ian at 10:42 PM No comments:

Email ThisBlogThis!Share to TwitterShare to FacebookShare to Pinterest
Labels: Heroes

Together at last - Damo Suzuki & The Jimmy Cake

Some time ago I separately discussed Damo Suzuki & The Jimmy Cake. Now I get to discuss them... together! As you know, Damo Suzuki used to sing with Can, but now he wanders the world playing improvised music with random musicians. His preferred modus operandi is apparently to play with random nutters who are meeting him and each other for the first time on stage, but he does occasionally play with actual bands. He did that last time he was in Dublin, playing with E+S=B. And tonight he was playing with The Jimmycake. This was in the Spiegeltent, a tent with mirrors which they had down in Dublin's docks as part of the theatre festival.

This was another of those gigs where you do find yourself thinking "come on man, how improvised is this?". I heard that the Jimmycake had rehearsed some general principles before the show but were still kind of playing it by ear during the concert, and had not discussed musical direction with Mr Damo (or Mr Suzuki) in advance of the concert. Things still sounded fairly under control to me, if not actually producing the kind of music your mother would like. The Jimmycake played a stormer tonight, and DS trimmed his sails accordingly, producing a gestalt evening of pure music. Of particular enjoyment to me was the J-Cake's new duelling keyboards direction, with Jurgen and Paul Smith (sp?) beginning the set with a twin keyboard onslaught that kept tripping in and out of phase with each other, before DS and the rest of the band joined in. And you may recall my commenting on how I reckoned losing so many of the brass instruments would leave the Cake a bit exposed in the wind department. Paradoxically the net effect this time was that I found myself paying far more attention to the slabs of clarinet noise.

It's a funny old rock and roll world. I feel that my inability to talk about music coupled with my poor note-taking has left me unable to do justice to this concert here. It was great to see musicians raising their game for each other, and it is hard not to look back on this as one of the musical highlights of the year.
Posted by ian at 10:03 AM No comments:

Political blogs are boring worlds of self-important discourse, so it is with a heavy heart that I now turn to world affairs. Nevertheless, this whole George Bush Wanting To Bomb Al-Jazeera thing is both fascinating and disturbing. When you read the reports on the BBC or Guardian websites, you start off thinking "What is this nonsense?". By the end, when you see how the British state is using the full power of the Official Secrets Act to prevent further discussion of the document you realise - that there is an actual document which is a transcript of an actual conversation in which Bush & Blair discussed the bombing of a television station simply because it was not toeing the US line. Of course, Bush might have been joking, but the joke is not one that the families of Al-Jazeera journalists already killed by his soldiers would share.
Posted by ian at 10:15 PM No comments:

On friday I went to a conference where this very important guy talked about the UN and the way the world is going. I was interested by the way he basically equated Bush's blocking of some international treaty on the small-arms trade with the Iranians non-cooperation with the IAEA. I know which of these has already claimed more lives.
Posted by ian at 9:56 PM 2 comments:

Thanks to Spy School, I've been reading a lot about theory of international relations lately. Hence all the stuff about political realism and the timeless wisdom thereof. Currently I am discovering the magic of post-positivist approaches to the subject, which are not really that interesting to people outside the business.

But what of the things I had been reading back on the 12th of October? I finished the eight issues of "The Authority" I acquired. They are entertaining enough in a big and stupid kind of way, but they are maybe a bit too stupid for all that they take themselves way too seriously. I have skimmed "Anatomy of a Dictatorship" sufficiently to grasp the basic point - that the DDR was a nasty dictatorship in which the Church represented the one major body not fully under the regime's control (for all that it was still very compromised). And I am still plodding through "Rip It Up And Start Again". Now I am on the exciting Psychic TV/Coil chapter, a welcome return to proper music after the false post-punk of the SST chapter.

And what of "Heart Of Darkness"? Amazingly, I have managed to stall on this again, which is a bit poor considering how short and enjoyable it is. But hey, Spy School comes first.

One fictional thing I have been getting much enjoyment out of is Vol. 2 of "The Essential Fantastic Four". They really don't write 'em like that anymore. Was the early 1960s Marvel explosion the US equivalent of "2000AD"? Perhaps.

There is a real danger that my next Spy School essay will be an analysis of international law as it appear in the "Fantastic Four". Oh dear.
Posted by ian at 8:54 PM No comments:

I have been listening to the Velvet Underground a lot lately. In the past, whenever I thought of or listened to the Velvets, these comments of a Sinister subber would come to mind:

For more, see here. This is now somewhat ironic, as I am hoping to write about the Velvet Underground for my work magazine.

Sadly, this is what I now think of whenever I hear the Velvets.

Before my iPod crashed, these were my most played tunes:

12. 'Born To Lose' by Johnny Thunders And The Heartbreakers - 8 plays

6. 'Daft Punk Is Playing At My House' by LCD Soundsystem - 9 plays

Whitey to the Rescue!

Email ThisBlogThis!Share to TwitterShare to FacebookShare to Pinterest
Labels: comics

The timeless wisdom of political realism

Recently I read some reprints of old Lee-Kirby Fantastic Four comics. In them a recurring event is the foiling of some nefarious Doctor Doom plot, which then sees Ben Grimm suggesting that they throw the Doctor into jail. "No Ben," Reed Richards then says, "Doom is the head of state of Latveria, and as such is entitled to diplomatic immunity". This always seemed a bit unlikely, but it was a handy way of ensuring that Doom was able to return in a month's time to threaten American freedom once more.

Bizarrely, it turns out that Reed Richards was acting correctly here, as heads of state (and other senior state officials) are in fact entitled to full immunity when fulfilling the functions of their office, which in Doom's case would include trying to take over the world.

This is the kind of important matter my course in International Relations covers.
Posted by ian at 1:11 PM 3 comments:

It's only a red panda, admittedly: Missing red panda spotted in tree

"He was very clever and stayed away from the roads and kept near the berries." 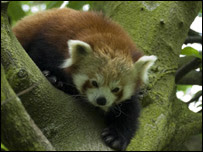