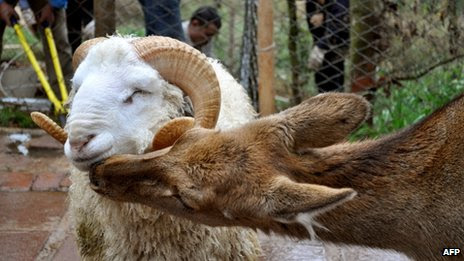 Changmao and Chunzi live in Yunnan Wild Animal Park. They appear to love each other. However, they are not of the same species 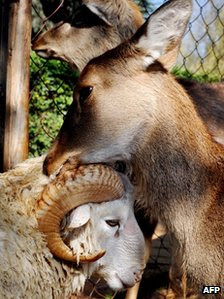 – Changmao is a ram and Chunzi a doe. Although they have a close bond, their relationship is not exclusive, and Changmao recently became a father with one of his own species. The park keepers decided to separate the two lovers so that Changmao could devote himself to his parental duties, but the plan went horribly wrong. Once parted from his true love, he became violent and abusive towards his offspring and its mother. Chunzi, meanwhile, was trying to lick at Changmao through a fence and had apparently squeezed out of her enclosure to be near him. So the park authorities have relented and are now letting the path of interspecies love flow freely.

An inuit panda production
Posted by ian at 10:05 AM No comments:

Pandas Mei Xiang and Tian Tian have acquired a new hobby – thanks to the enrichment programme in their Washington DC zoo, they have become artists. The zoo supplies them with non-toxic paints and lets them paint pictures on boards. The two Pandas currently favour an abstract expressionist mode of painting, though they they are apparently thinking of giving portraiture a go.

They also like the smell of the paint and have been seen rubbing it around their ears.

Which reproduced the information from Giant Pandas

An inuit panda production
Posted by ian at 9:55 PM No comments:

More NaNoWriMo action, in which Barry Ryan is given an assignment.

Ryan made his way down the corridor to the Chief's office and knocked on the door. A grunted "Dul isteach" called him in.

An inuit panda production
Posted by ian at 9:55 PM No comments:

What is this? Why it is chapter 1 of the novel I wrote for NaNoWriMo 2011. I am going to post a chapter of it a day for the next while, with chapters typically being somewhere between one and two thousand words in length. I am posting them so that the curious can see what a novel made up as the author goes along reads like. If that is not your thing then check out some of the other amazing posts Inuit Panda has to offer.

Please be warned that this is a largely uncorrected first draft. I have removed any obvious typographical errors that leaped out at me, but I have not proof-read it properly or corrected stylistic errors.

I'm as unimpressed by the title as you are.

Barry Ryan worked for an organisation that did not exist.

An inuit panda production
Posted by ian at 9:49 PM No comments: 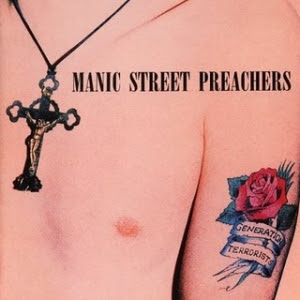 Time has not been kind to this first album by the Manics – it is basically a collection of unappealing cock rock tunes that only managed to acquire a following among discerning music aficionados thanks to the band's striking visual look, ability to talk a good game, and the general cloaking of the turgid music in an envelope of radical slogans and faux intellectualism. There are some good tunes buried in here, but the slick big rock production does them no favours.

I rescued this from the collection of old vinyl in my parents' house and, frankly, I wish I hadn't bothered.

An inuit panda production
Posted by ian at 10:40 AM 2 comments:

The Damned famously released the first UK punk single, the wonderful 'New Rose', complete with its Shangri-Las inspired intro. This was their first album, and while I do not know if it was the first UK punk album I do know that it is a stormer, 12 high octane tracks that speed along relentlessly. I get the impression that the Damned have maybe become a bit of a musical footnote, but this amazing record should be played to anyone inclined to dismiss them.

In case you're wondering, this is another record from my parents' attic.

is she really going out with him?

An inuit panda production
Posted by ian at 10:31 AM No comments:

I am still writing about records I have rescued from the pile of vinyl I have in my parents' house. This compilation of singles, b-sides, and so on comes from all the way back in 1988.

The Blue Aeroplanes were somewhat unusual for an indie band. One odd was just how many of them there were – their line-up seems so big that they were almost like an indie Earth, Wind and Fire, with built-in redundancy meaning that every possible instrument had several players in the band (for example, the sleevenotes list seven different guitarists). They also boasted a dancer at a time when it was neither profitable nor popular, with Wojtek Dmochowski serving up an engagingly amateurish brand of interpretative dance. The actual music is rather appealing too.

Most of the tracks seem to be written or co-written by lead vocalist Gerard Langley, whose singing style has a certain clipped beat poet delivery, with the musical accompaniment having the kind of broader sound you would get on a record featuring nineteen named contributors playing twenty different instruments (but not everyone and not every instrument is featured on every track). It makes for an intriguing stew and I am in some ways sorry that there are no longer bands like this. I suppose in some ways this Blue Aeroplanes album is a relic of a time before indie music went in one of either two wrong directions – the money chasing vacuousness of Britpop or the facile self-defeating loser music of people inspired
by the C-86 sadcore axis.

An inuit panda production
Posted by ian at 10:22 AM No comments: