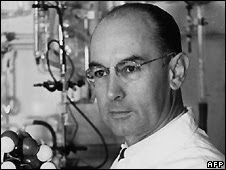 You have probably heard already that Albert Hoffman died yesterday. He was the man who synthesised LSD while working for a pharmaceutical company in Switzerland. He famously discovered the psychoactive powers of the substance after realising that he had ingested some through the skin on his fingertips, and that this was leading to odd visual effects. He then did what any respectable scientist would do, and orally ingested what he reckoned would be modest dose, and then tried to cycle home. Unfortunately, he had taken the equivalent of several hundred times the normal dose for a recreational user of LSD.

Email ThisBlogThis!Share to TwitterShare to FacebookShare to Pinterest
Labels: Drøgs

On an unrelated topic, I thought that the following story might be the kind of thing you'd appreciate:

The power of the magic ponytail.