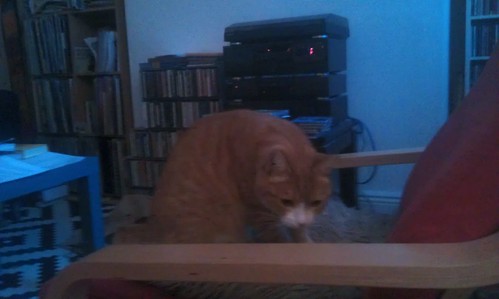 I will now recount some further adventures of our cat, Ms Billy Edwards (details of how she came to be named after a Stoneybatter character to be revealed in due course). The world is divided into those who love hearing about the exploits and opinions of our furry friends and people who would rather chew off their left arm than read about some stupid cat, but I beg such people to indulge me and keep reading, for the cat's progress is germane to my own activities. As viewers of my Facebook and Flickr photographs will know, she appeared somewhat downcast following the death of David Bowie. However, it transpired that the main reason why she was out of sorts was an infestation of fleas. Some cats can laugh off flea attacks, ignoring their new friends or subjecting their bites to little more than an occasional scratch, but they caused much greater annoyance to the Cap'n, who may have had an allergic reaction to them. Because we are new to cat ownership it took us a while to register what was happening but the signs soon became unmistakable.

The sad cat lay on my lap one night and whimpered when I moved to get up and go to bed. The following morning my beloved went off to the vet and got some anti-flea medication for her, which we administered, but she then retreated to her favourite box and just sat in there in a state of near despair for the rest of the day. She had stopped eating and because she is one of those cats who does not drink water she was becoming increasingly dehydrated. 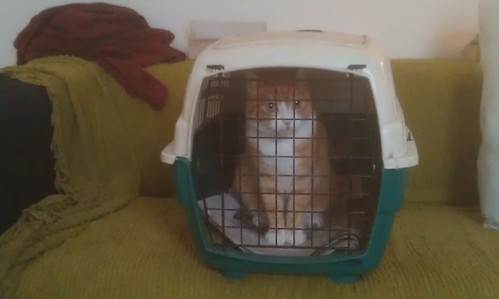 The following morning the cat was still alive (phew) so we brought her to one of the few Dublin vets that opens on a Sunday. On the way there she whimpered in her cat carrier and then wet herself in the waiting room because of all the scary dogs there. The vet reckoned that she was indeed dehydrated and not eating either because she had picked up a stomach bug from the fleas or because she had accidentally bunged herself up with hair thanks to excessive flea-driven grooming. She had to be kept in and put in a drip.

The vet also checked her for a microchip (at my request), and it turned out she had one. He said they would check the databases to see what came up.

I know from talking to a certain person who works in the Department of Agriculture that a lot of people really do not get that it is not enough to have a microchip in an animal, the chip has to then be registered on a database somewhere. There seem to be a multiplicity of databases on which a cat might be registered and we kept receiving updates from the vet saying that they had not found anything for her but were still searching, until eventually they did find her as having been registered with the DSPCA.

It would surely not be long before the vet tracked down her registered owner. We glumly wondered how we would go about saying goodbye to our beloved cat, while also pondering the etiquette of trying to palm off the vet bill on whoever was going to be taking custody of the Cap'n. But then we had a reprieve. The vet revealed that the cat's original owner was happy to let her stay with us. She had quarrelled with the owner's other cat (her own sibling) and so had struck out on her own. Should she return there the likelihood would be that she would do the same again.

We also learned from the vet that the cat's owner lives somewhere in Stoneybatter. We still have not made contact with her (I lazily assume that cat owners are all women, unless they are popular film critic Donald Clarke or myself) but we have many questions. Like, how long since the cat left her old home was it before she moved in with us? Are any of her various local cat enemies (Backyard Cat and Other Ginger Cat in particular) her estranged sibling?

What we do know is that the cat was born in 2009, making her older than we thought. Further information will be obtained in due course. We also know that when she came back from the vet's she was super affectionate and soon took to sleeping on our bed once more. And eating food. And generally being a happy cat once more, apart from when we play Bitches Brew by Miles Davis. 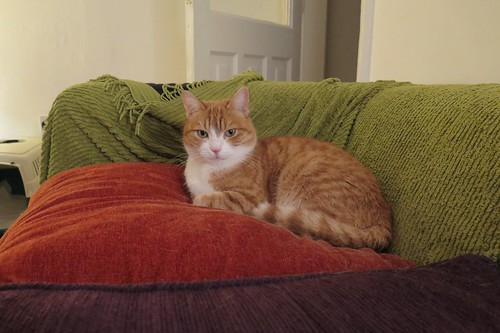 But right now I can imagine any cat-hater reading this is thinking "I've been tricked into reading a load of shite about a cat with a vague promise that it would somehow prove relevant to more interesting stuff about Ian, who is not a cat". Fear not readers, I have not led you astray. This important cat news sets the scene for the next post on this amazing blog. Come back tomorrow to read it. It will blow your mind.

Since writing the above we have indeed made contact with our cat's previous owner, meeting her and our cat's estranged sister. Further details may be revealed in due course.

Even more cat pictures
Posted by ian at 1:43 PM No comments:

The Politics of Contraband

And Glenn Frey died too. He was in The Eagles. I never liked The Eagles much. I remember hearing 'Lying Eyes' by them on a radio programme on which the listeners had voted for their favourite song ever. It was not just shite, it was whiney shite too. I don't know if Glenn Frey wrote or sang it (I am somewhat unclear as to who did what in The Eagles and I am too busy to go to the Internet to find out) but he must have had some involvement.

The one thing I do like by The Eagles is 'Hotel California' (the song, not the album). If everything by The Eagles was like that, I would love The Eagles. But it isn't. And I do not know what exact involvement Mr Frey had with this song either. 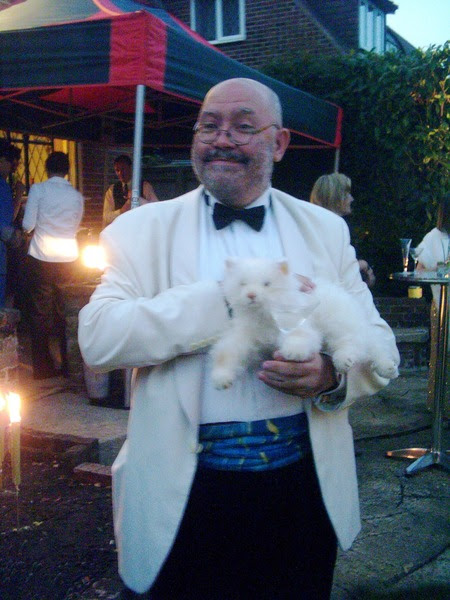 Glenn Frey went solo and had songs that appeared on the soundtrack of Miami Vice. There was a song called 'Smuggler's Blues', which was at least pretty good. I also recall an album track that I heard once or twice on the radio called 'The All-Nighter'. It was about how he is known as the All-Nighter, because he can keep at it throughout the night, not that he likes to brag or anything. I think it was more comical than anything else. Rubbish Eagles tunes were always associated with cocaine, but this may have been the most cocainey track with which Mr Frey was associated, as approaching random strangers to tell them about your sexual prowess strikes me as the kind of thing that users of that devil drøg would be inclined to do.

I know other people died too. I should mention Carey Lander, keyboardist with popular band Camera Obscura; I did not know her personally but many people I know did and they loved her very much. I must also mention Robin ap Cynan, known to many as a lawyer who worked in family arbitration stuff. I know him as a contributor to Frank's APA known for his erudite knowledge of classical music. He was either rude or funny (or rude and funny) depending on the observer. I am sorry I never met him.

More people have died since I wrote the above. They will be mentioned in due course. In the meantime you can check out things I wrote about other people who have died here.


Lemmy's death over the Christmas period was not particularly surprising as he had been in bad health for some time. I had read many accounts over the last few years of embarrassing concerts where he was plainly too sick to perform properly. It struck me as a bit sad because I feared he was trying to perform out of financial necessity rather than true rock and roll abandon, though of course I had no way of knowing this.

And yet, despite his obvious deterioration there was still this sense that he would be around forever, until he wasn't. Then I regretted the various times that Motörhead had played Dublin without my going to see them. I did however have the pleasure of seeing Lemmy performing live once back in the late 1980s when he came onstage for an encore with Hawkwind in the Brixton Academy. He was very tall (or everyone in Hawkwind was very short; from where I was sitting they came to the same thing).

I was never a massive Motörhead fan. I had/have a compilation of some of their big songs (featuring a novelty dance remix of 'Ace of Spades' that apparently featured in an ad for pot noodles). There are plenty of good tunes on it, notably 'Bomber', 'Killed by Death', and especially 'We Are The Road Crew', though the standout track remains 'Ace of Spades', a tune people like me remember for the time Motörhead appeared playing it on The Young Ones, Lemmy characteristically playing with a speaker situated somewhere above his face.

For someone who appears to have never stopped living a rock 'n' roll lifestyle Lemmy made it to a good age. He was no indestructible Keith Richards but he had a reasonably good innings, all things considered.

My favourite Lemmy anecdote is the one about how when Motörhead were touring Bomber they had a lighting rig done up to look like a Lancaster bomber. While playing in Berlin he reputedly looked up at the rig and said to the audience "Been a while since you saw one of them?"

For more death action, check out my recollections of the life and works of Mr David Bowie.