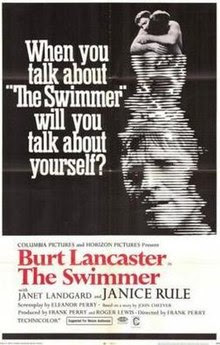 This was the only non-music film I saw in the recent Dublin film festival. It is an old film (from 1968) that I had never seen before but which had somehow come up in conversation a couple of weeks before the festival programme came out. The basic premise of the film is simple enough. Burt Lancaster plays a man who arrives out of the blue in the enormous back garden of some friends. He is wearing only swimming trunks and he takes a dip in their pool to call off. He chats to his friends, who offer him a lift home, but he then decides that instead he will swim home through all the swimming pools in the gardens on the way. As he heads off on this strange journey, he at first meets more old friends (all of whom seem to be resting after parties to which he was not invited) who are invariably pleased to see him.

As the journey goes on, people become less pleased to see him, with the first inkling of this being a nudist couple who worry that he is going to try and palm money off him, implying that he is in some financial difficulties. We get an increasing sense that all is not right in the world of the Burt Lancaster character - are his wife and daughters really waiting eagerly for his return? Why is he so evasive when his wife is mentioned? Has something gone very wrong with his financial affairs? And his behaviour seems increasingly odd the more you see of it (beyond deciding to swim home through neighbour's swimming pools). He meets the daughter of a friend who when younger used to babysit his now grown-up daughters. He talks to her about coming over to babysit them again, which she takes as a joke but it starts looking like he is a bit confused. He persuades her to come with him, but his behaviour to her becomes increasingly inappropriate. She runs away, but he swims on, meeting people who are increasingly hostile to him. It would not be a spoiler to reveal that things do not end well for him.

So by now you get the idea of what we have here - a film about a crisis of masculinity in middle class middle aged white America, the sense that something has gone wrong with the lives of the parents of the baby boomers. The sexual politics are fascinating, both in terms of the swimmer's relationships with the women he meets on the way (especially the friend's daughter and another character, an actress with whom he had had an affair that ended badly) and with his wife and daughters at home. And race gets thrown into the mix too, when he meets the black servant of one house he visits, he mixes him up for the servant they used to have and talks about how wonderfully musical he had been, whereupon the actual servant says something like "I bet he had a great sense of rhythm?"

I have seen Burt Lancaster in relatively few films, but in this he is perfect, conveying the kind of ambiguous confidence that the role requires. He projects this awesome virility but also the sense that it is a mask hiding some terrible failure.

So this is a film I recommend whole-heartedly to people who like films.

An inuit panda production
Posted by ian at 11:29 AM

Yes but have you a copy to send my way. Looks great.

No copy sadly, but I'm sure it is available on DVD or that Netflix the young people like.