Wow, someone has managed to get the funding together for another modern composition festival in the National Concert Hall, truly the Celtic Tiger is back. But they are still not selling any kind of season ticket to this so going to more than a coupe of events is unaffordably expensive if like me you are attempting to live within your means. Thus I made it to just three events this year. The handy combination of my bad memory and time constraints means that I will not say too much about them.

The first event was a concert in the John Field room by the Arditti Quartet. These are the string quartet of Mr Arditti and they play the modern composition. I have no memory of the composers of the pieces they played on this occasion, but I do remember quite a few of them being of the scratchy scrapey variety. As a person of forward thinking tastes this was right up my alley, but when one movement of one piece suddenly went all melodic (I think representing snowfall or rainfall or something) I found myself thinking that maybe melody is a bit underrated in the world of modern composition, which made me wonder if I was turning into Geir Hongro (Mr Hongro is this fellow I remember from the I Love Music message-board, who used to post about how melody is the only important thing in music and that music without melody is not worth listening to, always advancing this extreme opinion in a very polite and courteous manner regardless of the critical brickbats that would be thrown his way).

Then on Friday I went to a concert by the Crash Ensemble who were playing in what used to be the Engineering Library of UCD in Earlsfort Terrace and has now been annexed to the National Concert Hall. I was amused by the idea that the musicians were sitting where once bound volumes of the International Journal of Sludge Disposal once were shelved. The pieces played were by Michael Gordon and Gyorgy Ligeti and were enjoyable. I think maybe the chamber concerto of Ligeti was the most enjoyable piece as it made the fullest use of the ensemble.

After that in a mysterious room (but not the old Medical Library as claimed by the programme) we were treated to a "performance" of Karlheinz Stockhausen's 'Oktphonie'. I put performance in scare-quotes because this was one of those electro-acoustic events where it is all pre-recorded and you could basically be sitting at home listening to it if you had good enough sound system. This was played in room with four speakers (not 8, unless there was an extra four I failed to notice) and the music did proper quadrophonic stuff, moving around the corners and all that. As this was on quite late and I had had a little drink I did get a bit puppy tired and nearly nodded off once or twice, which was most enjoyable. 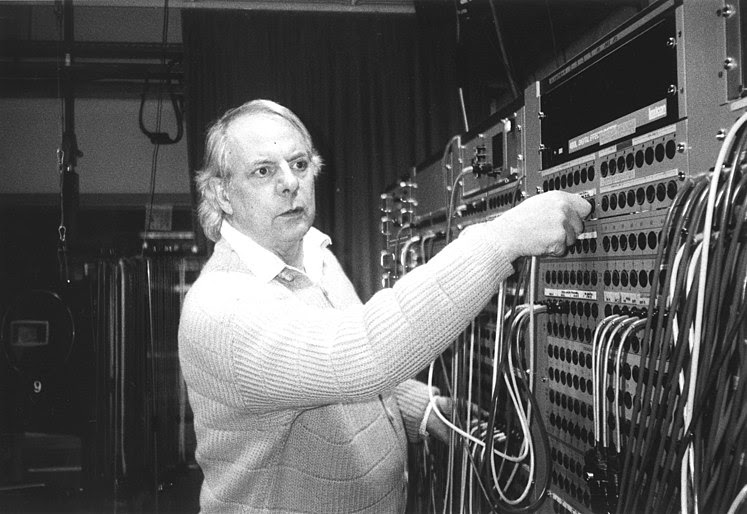 One final interesting thing about the Friday concerts was that I recognised a lot of faces I am used to seeing at the kind of avant-garde musical events I associate with the Skinny Wolves-Joinery-Hunters Moon axis. I tend not to see that kind of people at events associated with the Crash Ensemble, Ergodos or Kaleidoscope. Could it be that the musical barriers are breaking down and the separate worlds of weirdo music are merging into one unstoppable force?