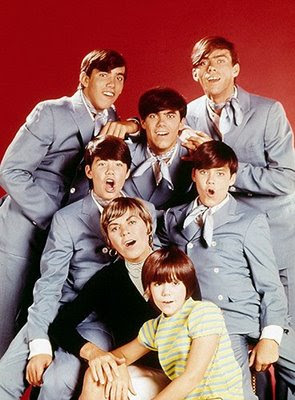 This is another of the music documentaries Allison and Tiffany Anders programmed in the Jameson Dublin International Film Festival. It tells the story of the Cowsills, a band I only know of because one of my correspondents wrote a fascinating piece about them for that august publication Frank's APA. In case this is all new to you, the Cowsills were a band of brothers, their little daughter and their mother who had a couple of hits in the late 1960s. Their music has a sunshine pop quality to it, characterised by lots of vocal harmonies and stuff like that. They laid down the template for the Partridge Family. I am unclear as to what extent they played their own instruments or if any of the band wrote their songs. My sense is that their moment of fame was relatively short in the United States and they never troubled the charts over here.


This film was directed by Louise Palanker and is narrated by one of the surviving Cowsill brothers (Barry? Brian? Bill? Boris? Bohemond? There are so many of them and I struggled to get a fixed sense of which was which, though it turns out the narrator was Bob Cowsill). There is a lot of fascinating archive footage and interviews now with the surviving members of the band. And the film looks behind the sunny exterior at the darkness lurking within the Cowsills. That darkness emanated from their father, Bud Cowsill, who seems to have been a thuggish bully. As well as running the family band with a rod of iron, being quite handy with his fists whenever anyone stepped out of line, he reportedly was also sexually abusive to his daughter Susan. His management of the Cowsills seems to have been a bit erratic; his bullish personality opened doors for him, but his ability to piss people meant that these doors tended to quickly close, which may explain the band's short period of success. And he made the bizarre decision to sack the most musically creative of his sons from the band. At the time the story was that whichever one of them he sacked had been caught smoking a joint, but the film argues that it was actually because he stood up to his dad (which in this case means he refused a beating).

Bud Cowsill is no longer alive and so cannot answer these accusations on camera. Barbara Cowsill, mother of the others, also died some time ago, so Bud is only dealt with by interviews with his children and his sister and Barbara's sisters. The picture painted of him is not a pleasant one but it is one-sided, even if confirmed by so many different voices.


What I was struck by, though, was the contrast between the adult Cowsills accounts of their miserable past and the archive footage of them playing on TV shows. In the old footage they look so carefree, so effortlessly happy that it is hard to imagine the tenterhooks they lived on at home. I thought maybe that was something the film could have explored more. Was their scary dad explicitly telling them to go out there and look happy or they would get it at home? Or were they able to escape their father's reign of terror when they were performing? They do seem to have genuinely liked playing music, so the latter is perhaps more likely.

The film brings the story up to something approximating to the present day. Things went better for some of the Cowsills than others, with some of them battling substance abuse issues and that kind of thing. Many of them seemed to have retained some kind of engagement with music, and there is an interesting sequence where they are invited to sing the national anthem before a baseball game in Fenway Park. They decided initially that all of them would sing it, even Dick Cowsill, who years previously had been blocked from joining the band by their father (Bud claimed Dick failed a drumming audition but it seems more that the father just hated him). This leads to an awkward scene where the siblings are practicing in a hotel room, and Dick just cannot do the harmonies as he does not have the singing experience, leading to some terrible inter-sibling sulkiness. In the end he show up at Fenway and mimes and the whole thing goes off very well (what a great national anthem America has, tears even came to the eye of freedom-hating me). The only downside to that incident was one of the more freewheelin' Cowsills passing out in the Red Sox hall of fame after having a bit too much of the hospitality.

The film rolls on, presenting the sad deaths of two of the more wayward siblings and showing the others as they continue on in music (to at least some extent) and with life generally. For all the sadness that these people went through the film ends up being quite uplifting in its portrayal of people who really do seem to love music and love that they are continuing to make it, even if they know that their fame was a fleeting period in the past and one that will not return.

An inuit panda production
Posted by ian at 11:20 AM

You may already know that there were Cowsills comic books. If you want to see some examples, you can go to http://www.misterkitty.org/extras/stupidcovers/stupidcomics347.html