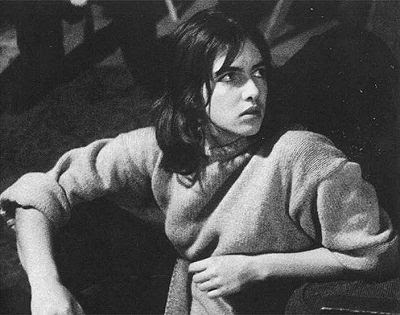 The first run of songs on the compilation album are all sung unaccompanied by Ms Briggs. These are not really to my taste. Her voice is not unappealing, but I am not really a big fan of solo unaccompanied singing, as to me the results are a bit thin. So even though in this case she is singing classic songs like 'She Moves Through The Fair' there is a certain meh quality to it all (for me).

I should mention one slightly odd song choice here, the song 'Let No Man Steal Your Thyme', a tune lyrically very similar to a song called 'A Bunch of Thyme' that was a big hit for strange country and Irish act Foster & Allen in the early 1980s (they appeared on Top of the Pops dressed more or less as leprechauns; see for yourself on YouTube). This song warns women to be careful of their thyme, as there are apparently lots of men out there who are keen to steal thyme from young ladies. Maybe things were different in the past, but I do not think thyme was ever that much in demand, so there might be some kind of metaphor business going on here.

The one song I do really like here though is one called 'Willie O Winsbury'. It is not the first song on the record with instrumental accompaniment, but it still leaps out at me more than anything gone before. The song tells the story of a king who returns from imprisonment abroad to discover that his daughter Janet is up the duff thanks to the attentions of one Willie O Winsbury. The King has this rogue brought in bound with the intention of having him hanged for his impudence, but on seeing him he is blown over by Willie O Winsbury's handsome features. The King blesses the marriage of his daughter and this mysterious character and they all seem to then live happily ever after. I am not sure what is so appealing about the song. Partly it might just be that it ends on a surprisingly positive not for a folk tune, for all that there is an air of dramatic tension all the way through it. But it is also a great tune and one that suits Briggs' voice. Her own playing on the bouzouki is also part of what makes this song so attractive, so much so that for me it is a pity she did not play that instrument on the a cappella tracks.

Even if you have never heard Anne Briggs singing this song you have probably heard the tune. An instrumental version played by a brass band features in The Wicker Man, during the procession.

I like 'Willie O Winsbury so much that it alone justifies these two Anne Briggs records.

Before moving along, I should mention two non-musical things about Anne Briggs, though they do bring me dangerously close to the Van Morrison School of Music Journalism. The first of these is that from old photographs of Anne Briggs it is clear that back in the day she was stunningly beautiful. I know it is wrong to judge artists on the basis of their looks, but with Anne Briggs her sultry looks are so striking that it would be almost surreal to ignore them. The other fact-tastic fact about her is that back in the day she was famously a bit of a hellraiser; in a notoriously boozy scene she was known for a terrifying level of alcohol consumption, for being drunk all the time and a tendency to engage in bizarre behaviour (jumping off a cliff into the Atlantic to swim with dolphins being the one people most talk about). I think I read somewhere that Richard Thompson cannot recall ever meeting her when she was not in a drunken stupor. It has been suggested that it was a shared fondness for terrifying levels of alcohol consumption that may have facilitated her relationship with the allegedly "difficult" Irish performer Johnny Moynihan (that and a shared interest in bouzoukis and Moynihan being a bit of a roffler).
[meta: I am now worried that Anne Briggs will google herself, find this, and leave an irate comment saying "Do you mind, I was never more than a social drinker! Those stories are just the idle tittle tattle of jealous liars!"]

I saw some relatively recent footage of Anne Briggs on YouTube, I think a clip from a Folk Britannia documentary. It was interesting what good shape she was in for her age, both physically and mentally. Unlike John Martyn and others she seems to have managed to not let alcohol destroy her body and mind. I don't know if she has given up alcohol completely or merely cut back to a more modest level of intake, but it is nice to see that there is more than one way these kind of stories can end.

An inuit panda production
Posted by ian at 11:24 AM