My friend Mad King Ken has long recommended this record. It is one of that bootleg series of Dylan live albums. The other one of those I have is the so called Albert Hall concert in 1966, where some twunt shouts "Judas!" at Dylan for the folkcrime of playing with electric instruments. From nearly 10 years later, Live 75 sees Dylan unproblematically embracing a big electric sound and band format without any obvious sign of disgruntlement from the audience. If there are still folk purists out there who reckon Dylan should be sticking to acoustic instruments they have given up going to his live shows. 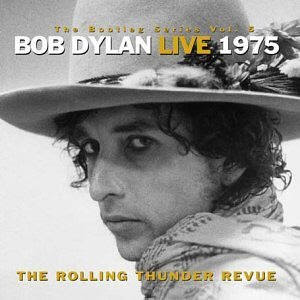 And while the audience are less hostile, Dylan himself seems less confrontational. On the 1966 record, Dylan is playing at the audience on the electric tracks, giving them amped up music whether the fuckers want it or not. On this one he seems almost like a showman. These recordings sound like they come from shows that would have been actively fun to have attended. A lot of that must come from the army of extra musicians playing on this (including T-Bone Burnett and Joan Baez and many others), giving the record the feel almost of a live jam party (dude).

But there is still an edge to this collection, the spectral presence of the protest singer of yore. One of the most striking tracks on this for me is 'Hurricane', a song about a man languishing in jail for a crime he did not commit. But instead of being a mournful solo acoustic dirge, the song zips along with en effortless verve and the kind of instrumentation that would have people dancing in the aisles at concerts.The way the lyrics manage to advance the (true) story without falling into ponderous plodding is to me one of the greatest illustrations of Dylan's famous poetic skills.

An inuit panda production
Posted by ian at 11:35 AM