In March 2011 the terrible tsunami devastated much of Japan. Most of the town of Ofunato, in the Iwate Prefecture was destroyed. Kazuko Yamagishi and Takeo Yamagishi were lucky in that their home escaped destruction, though they had to endure the horror of living in a town that had been laid waste and whose neighbours were now homeless. They were also separated from Suika, their cat. In the three months after the tsunami the Yamagishis searched for Suika but then came to the conclusion that they would probably never see their cat again.

However in April this year another couple spotted a cat curled up in a nearby forest - a friendly cat wearing a collar. They brought it to the Ofunato Health Centre, which placed an ad in the local paper when no one came forward to claim it. But then one of the employees in the health centre notice the Yamagishis' name and number written in faded letters on his collar, and was able to reunite him with his owners.

The Yamagishis are overjoyed to have Suika back after all these years. Suika is being more guarded with his opinions. 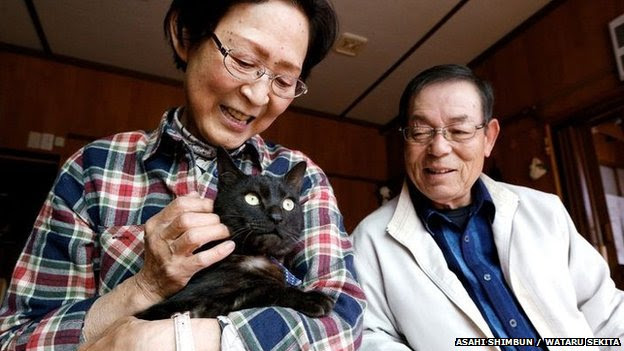 An inuit panda production
Posted by ian at 11:56 PM