Great interest was excited by Sugar, the Boston cat who survived a 19 storey fall from her home. The BBC has looked into the question of how she managed to survive this great fall and whether cats generally are resilient to drops from great heights. This appears to be a matter to which scientists have applied some attention. Unfortunately, moral squeamishness and possible public relations issues have prevented this important matter from being investigated by throwing a series of cats from ever higher windows. Instead they have had to rely on statistical evidence from emergency vet surgeries in cities with high windows from which cats can fall.

What is striking is how high it is possible for cats to fall without suffering fatal injury. Sugar seems not to be the record holder in this regard – while she fell 19 storeys onto grass and mulch, another cat fell a staggering 32 storeys onto concrete but survived with only a chipped tooth and a collapsed lung. The statistics from the vets revealed that 90% of falling cats survived, with only 37% needing emergency treatment to save their lives. 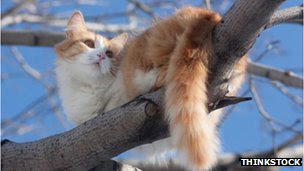 The reason for the cats' survival is simple enough. The animals evolved to live in trees, where the occasional fall is going to be a fact of life. Their bodies are designed to slow their rate of descent and then to cushion them on impact with the ground. So a fall that would definitely kill you or me leaves them with a good chance of survival.

But before you start sending your own cat out on a skyscraper ledge, perhaps to start hanging onto the hands of a clock or suchlike, beware. Scientists report that cats like Sugar are very lucky to survive such a fall and that many suffer terrible injuries from their unplanned descents. Even those statistics of a 90% survival rate are not as good as they look – they do not include the cats who were immediately killed on impact, and they may not include those cats who were injured so badly that they were taken to a vet to be euthanased. And the figure for "survival" may mask cats who lived on after their fall but who suffered horrendous life-changing injuries. As Dr Jake Socha is quoted as saying at the end of the article: "The lessons learned: screens, please, on the windows".

An inuit panda production
Posted by ian at 4:32 PM