Otters are well known for their fondness for fish. They usually hunt for fish in rivers and occasionally coastal sea water, but young female otter Linnhe caused astonishment when she arrived in a seafood restaurant in Fort William. It is not known whether the gourmande otter had developed a taste for fine dining. 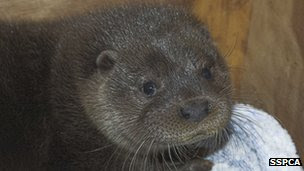 Atypical otter behaviour seems to be increasingly common in that part of Scotland. A few days before Linnhe's trip to the restaurant another young otter, this time a male named Roy, was found in a post office in the nearby town of Caol, where he was trying to buy some stamps.

They are both now being cared for in the Wildlife Rescue Centre in Fife until they can be released back into the wild. An inuit panda production
Posted by ian at 9:39 AM