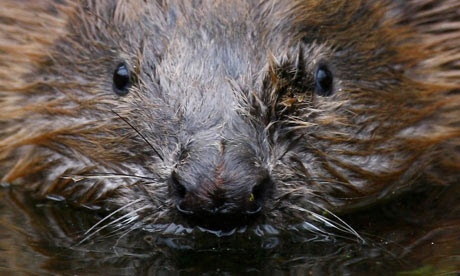 Beavers became extinct in these islands some time ago but are now living wild in Scotland once more. There was a limited official programme to reintroduce them but many more have escaped from private collections – with speculation suggesting that some people may have deliberately released the dam building rodents without authorisation. This has predictably led to moaning from the kind of landowners who moan about things, and the Scottish government began to draw up plans to round up the rogue beavers. This programme has now been abandoned – the beavers would have been very difficult to round up and a programme to exterminate them would not have played well with the public.

There are now apparently some 300 feral beavers in Scotland. They are expected to spread over the southern and western Highlands, possibly making incursions into northern England. Beavers are understood to have positive impacts on the environments in which they live, though they may compete with anglers over fish stocks.

The unauthorised reintroduction of vanished animals to these islands seems to be a bit of a thing at the moment. As well as the beavers, wild boar populations have returned to Ireland and England. Now there is also talk of reintroducing the lynx and the wolf to Scotland, something that will strike fear into some and excite the imaginations of others.

An inuit panda production
Posted by ian at 10:14 AM