ATP TV showed some fascinating films. I could only take so much of Scum, featuring a young Ray Winstone. This is the one set in a borstal or young offenders' prison. It is a very impressive film, but maybe not what you want to see just before going to bed. I think it was the "I'm no poof – but from now on, you're my missus" bit that made me turn in while I could still sleep without having to scrub out my brain. More disturbing, though, was the whole thing about whoever was the boss prisoner (a position earned and retained by beating the shite out of anyone who even looks at you funny) calling himself the "daddy". So a daddy is not someone who sits you on their knee and reads you bedtime stories, but rather someone who slaps you around and tells you to shut the fuck up – you can guess what kind of happy upbringing these fellows must have had. 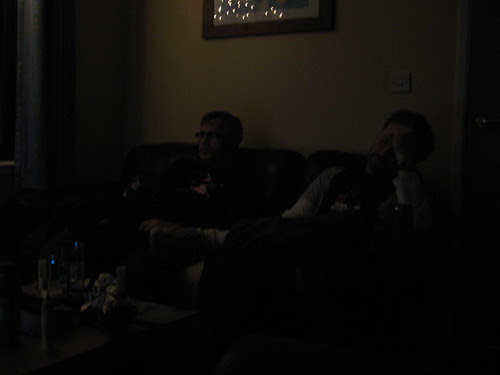 Spongebob Squarepants seemed to be completely deranged. OK so we were watching it with the sound turned down, but it really did seem like something aimed more at drøg casualties rather than children. Also bizarre was Scorpio Rising, a film by some famous guy which seemed to intercut footage of gay Nazi bikers with random other bits and bobs. It was not great, but it did keep you occupied. More impressive was Lucifer Rising, by the same guy. This seemed a bit more thought through, and featured filmed footage of Egyptological and occult themed stuff over a brooding prog rock musical accompaniment. It just was.

We also derived some enjoyment from Ed Wood's Glen Or Glenda, the great director's no budget plea for understanding for men who like to dress up in women's clothes. As you probably know from having seen the Tim Burton Ed Wood film, Wood was able to get an aging Bela Lugosi to appear in this, but he seems to have no real idea what to do with him, so rather than having him appear in the main story, the film instead keeps cutting off to Lugosi sitting in a room on his own declaiming stream of consciousness gibberish. They do not make them like this anymore. On actual TV, meanwhile, that programme about UK government spin doctors definitively disproved that old cliché about swearing being a sign of a poor vocabulary.
Posted by ian at 10:09 AM