Nightmare 2009: The Lure of the Chalet

I went to the MBV-curated Nightmare Before Christmas in December – shortly before Christmas. When I was talking to people at work about it afterwards, I explained that it was a music festival and it took place in a Butlins Holiday Camp. "Oh", said one of my colleagues, "Was it one of those '80s revival things?". "No", I replied, but then I considered the line-up. For it was all a bit 80s (or early 90s) revivalist, except maybe it was more like a revival of underground music that people have semi-forgotten.

I did pretty badly for seeing actual bands this time round. Irene and I were sharing chalets with two home-birds, which made domestic loafing always seem that bit appealing, but also we felt strongly the lure of real ale pubs of Minehead. This meant we were doing a lot of quaffing hearty ales when we should have been discovering new bands. We also went on the Minehead Meander. Ah well, the new bands were probably shite, so no loss. 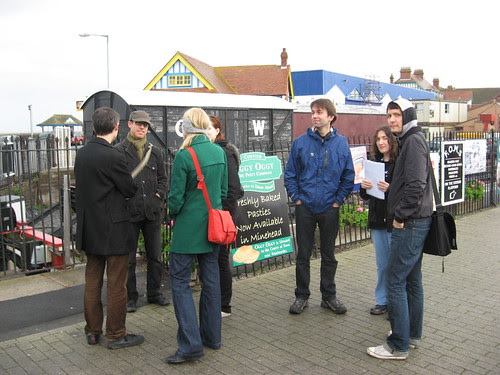 So, whom did I see? Well, one somewhat well-known band were the Television Personalities. You may know these fellows from their novelty punk classic 'Part Time Punks', though I am sure that hipster elitists out there will say that they have a great many other wonderful songs. As a live band, they had a certain idiot-savant quality. What I mean by this is that they were not really that great, but they were heroically not great. The music chugged along, but what was particularly striking was the tuneless warblings from their "singer". What made all this all the more bizarre was the way so many of their songs seemed, compositionally, to be reliant on having a vocalist of much greater ability than him. It was all rather strange, a compelling experience from which it was impossible to avert one's eyes and ears.

Of the other old bands, from the tail ends of their sets caught it appeared that Swervedriver and That Petrol Emotion still have it. That said, with the Swervies it was suggested that they only really have a couple of stand-out songs, and the shoegaze sensations waited till the end of their short set to play them. Maybe so, but their stand-out songs are really very striking, and the band had an air of tightness to them that you would not expect from a band so long retired (and after not that much success in the first place).

The Petrols, meanwhile, were a band I was a bit wary of going to see again. I remember liking them when, back in the day, I caught them live at a couple of Trinity Balls, but this was back when my musical tastes were a bit less advanced. I was particularly afraid of bigging them up and bringing Irene to see them, only for it to be apparent once they started from where Har Mar Superstar got his stage act. But actually no, their was a persistent groove to their music, and even without hearing their big hit I heard enough to wish I had come down and caught the whole of their set. Some of their appeal comes from their singer. Aside from his non-wanky charisma, he fulfils the important role of interpreting the incomprehensible patois of the other band members; unlike them, he is not from darkest Derry. But yeah, I left this thinking that I might have to go and look for one of their classic albums or something.
Posted by ian at 10:54 AM