The IFI has been running a long retrospective of films by Alfred Hitchcock. This is the only one I have made it too. Even if you have never seen it, you may have heard that it recently topped a poll of Important People by Sight and Sound magazine on the Greatest Film of All Time. I was seeing it for the first time and was concerned that the talk preceding it would be full of spoilers, as it is the kind of famous film that people assume everyone else has already seen. Fortunately my fears were unfounded, with Charles Barr's brief 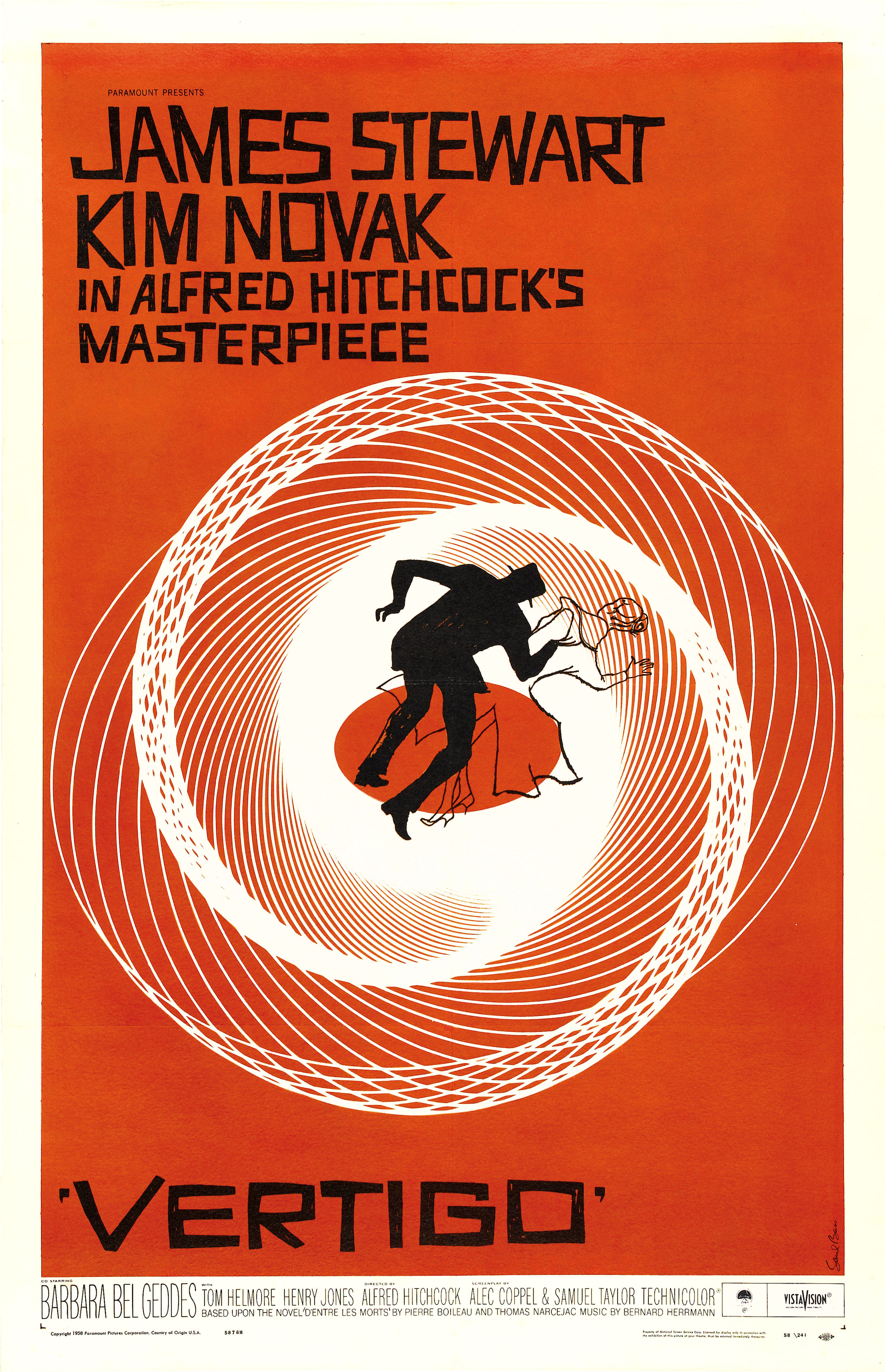 talk a master class in how to impart information about a film without describing everything that happens in it. I will now attempt to emulate Mr Barr by talking about the film without spoiling it and at the same time still being somewhat interesting to people who have seen the films a million times.

The plot is simple enough, at least initially. James Stewart plays Scotty, an ex-policeman who has a fear of heights. He is friends with an artist lady (Barbara Bel Geddes) who is clearly crazy about him but towards whom he harbours no romantic thoughts. Then Scotty is engaged by an old college friend (Tom Hensmore, an Anthony Eden look-a-like) to shadow his wife, Madeleine, (Kim Novak). The problem with the wife is that she is going mad - or is increasingly possessed by some kind of sinister occult power. Scotty follows her and sees her visit the grave of a woman called Carlotta Valdez. Then he sees her visit an art museum to stare at a picture of Carlotta Valdez. Then she checks into a hotel room in what was once the home of… Carlotta Valdez. Ms Valdez is revealed to have been this woman in the 19th century who went mad and killed herself when her married lover took her child away from her. And then Scotty discovers that Madeleine is Carlotta Valdez's granddaughter - OMG!

As is the way of these things, Scotty becomes increasingly obsessed with Madeleine (with creepy voyeurism a big undercurrent here), until he saves her life when, in a trance, she tries to drown herself. After that things develop further and I can say no more for fear of spoiling the enjoyment of people who have yet to see the film.

There is a lot of stunning stuff in this film. The cinematography is great - aside from the wonderful views of San Francisco, it featured loads of vertigo-inducing high and low camera angles, creating a slight sense of disorientation in the viewer mirroring that from which Scotty was always suffering. The use of San Francisco as a location works very well here - aside from its attractiveness as a city, the hills and slopes make its physical appearance a hypnotic nightmare for anyone with an extreme fear of heights. Also striking is the musical score by Bernard Herrmann, even if it lacks a single iconic piece like that of the shower scene in Psycho. And the art direction and costuming are rather appealing. Kim Novak's costumes are the obvious star here, but the simultanaeously louche and smart look of James Stewart the ultimate winner. I am thinking that it really is time I got myself a fedora and took to wearing a jacket and tie at all times.

I think, though, that the performances and characterisation are what really makes this film, in particular Stewart as Scotty. In his talk before the film Barr compared his role to that of John Wayne's in The Searchers - they both are presented as a certain kind of icon of masculinity, but as the respective films progress we see them increasingly as damaged goods. Stewart plays Scotty as the driven detective and the modern day knight riding to the defence of a vulnerable woman, playing on the various good-guy roles he had taken over the years. As the film goes on, though, a more disturbing side to him appears, with him coming across as a cruel obsessive in the latter part of the narrative. His rejection of the artist lady in favour or the unknowable and unattainable Madeleine seems also like an act of childish narcissism on his part.

Hitchcock has an annoying habit of sabotaging his films with scenes of ponderous exposition, thrown in for the benefit of audience members who do not like things to get too confusing. Examples of this would be the psychiatrist's boring explanation at the end of Psycho or the sudden cut away in North By Northwest to the guys sitting in a room who spoil the film's central mystery by telling us what is in fact going on. Sadly, Vertigo does this too, with a premature reveal that removes any mystery from the scenes that follow. Aside from making what follows less mysterious, the reveal also distracts away from how deranged Scotty's behaviour has become by this stage, which is a real shame - Scotty's dysfunctional obsession is surely the key point of the film and anything that draws attention from it is a terrible mistake. Barr mentioned that the premature reveal was filmed by Hitchcock, who then decided not to use it, but the studio insisted on its inclusion. Hitchcock then apparently took to claiming that its inclusion was his idea after all. Oh well.

Vertigo strikes me as the kind of film you can watch again and again and again. On subsequent viewings that reveal must become less important as you appreciate the film less on a plot level. For all my griping, this really is an incredible film and if you have not seen it before you should try to do so, ideally in a cinema with a proper big screen and sound system.

I should also salute the restoration of the 70mm version of the film I saw. It has its flaws and wonky bits but is overall a great piece of work. We were amused to see that the restoration was sponsored by Chivas Regal, which seems rather appropriate given how much whisky and soda is put away by Scotty in the course of the film.