B is for Baader Meinhof

In the pages of Frank's APA we have started doing this thing where we go through the letters of the alphabet and talk about something we like beginning with each letter. This is my entry for the letter B. 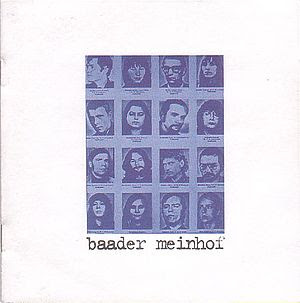 Some time after recording the third Auteurs album Luke Haines found himself beginning to lose interest in the band. For some reason he found himself listening to a lot of funk and reading about West German left-wing terrorism in the 1970s. He hit on the great idea of combining the two in a concept album about the famous Red Army Faction (colloquially as the Baader Meinhof gang, after its two most famous members). Thus in 1996 he released this record.

The album overall has a mutant funk feel to it, with odd flourishes of vaguely Middle Eastern sounding strings, calling to mind the links with Palestinian groups the RAF ineffectually cultivated. A lot of the percussion sounds like handclaps or something akin to tablas, with the opening track ('Baader Meinhof') in particular being hand-claptastic.

I do not think this album did that well - I keep seeing people on the Internet saying that they love Luke Haines but that for them this is easily his worst album. These people are wrong. Or maybe they do not share the interest in 1970s terrorism that I have; for me the combination of Luke Haines' cultivated nastiness and a view of the subject gained from reading the likes of Tom Vague's Televisionaries makes this the best thing ever.

The songs take us on a tour of the strange radical politics of the period, throwing out references to the likes of Rudi Dutschke and Carlos the Jackal, as well as to such RAF stalwarts as Andreas Baader, Petra Schelm (not so much a RAF stalwart as their equivalent of Freddy from Superfly) and Holger Meins. The lyrics maybe get more poignant as the record rolls on, increasingly hinting that the RAF was a bloody failure, both for its members and its victims. The closing track, a reprise of the opener, makes the obvious point that far from undermining the state, the RAF's failed campaign reinforced it, by creating a climate of tension that caused people to back more intrusive policing methods.

Lyrics about West German terrorism may not be everyone's cup of tea, but surely everyone can enjoy this album's mutated white English take on funk.

I think I still have that issue of 'Vague'

I still have it "somewhere". I think the Televisionaries book adapted from it is more accessible at the moment.