A is for "After Murder Park" by the Auteurs

In the pages of Frank's APA we have started doing this thing where we go through the letters of the alphabet and talk about something we like beginning with each letter. This is my entry for the letter A. 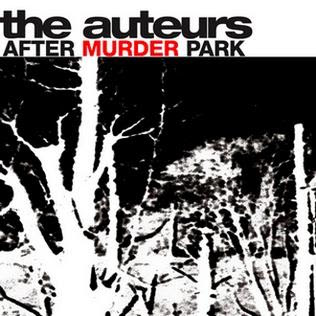 I am writing about After Murder Park by The Auteurs. This was the third album by this band, released in 1996 when the band's career was on the slide a bit. It was recored by Steve Albini, whose basic approach dovetails nicely with Luke Haines' song-writing. Although the instrumentation is broadly the same as on the previous Auteurs albums (guitar, bass, drums, cello), the sound is rather different, thanks to the live-sounding Albini production with its usual fore-grounded drums.

Haines is I think one of the great under-rated songwriters, someone who has languished in semi-obscurity perhaps because he (by reputation) is such a contrary individual that few people in the biz were willing to do him any favours. His best songs typically see his nasty snarl married to his equally snarling guitars, and you get some songs that really go for that here, with 'Married to a Lazy Lover' and 'Light Aircraft on Fire' being typical examples here. But the songs do not all sound like that, there is also the wonderful 'Unsolved Child Murder', which seems to tell of a community torn apart by a child disappearance, jumping from different points of view including that of the local character who has been popularly tarred with responsibility for the terrible crime. The grim subject is offset by music that is basically late Beatles pastiche. Another fun tune is ' Child Brides', which seems to be from some yokel community with its Own Ways, reacting against city slickers rolling in and taking away their underage wives. Small wonder the album was such a monster hit.

I should have more to say about an album I profess to love, but I was up against time constraints. So I will leave it at that and hope to produce something better for B.