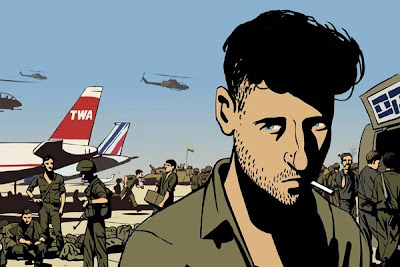 This is only a quick note on this animated film. I am basically writing to encourage everyone reading to go and see this while it is still in the cinema. The film is a semi-documentary in which the (Israeli) film-maker tries to remember what he did during his country's 1982 invasion of Lebanon. He knows he was there, he understands that he was near to the massacres of Palestinians in the Sabra & Shatila refugee camps, but he does not remember anything of it. In the course of the film he talks to a number of other people who also invaded Lebanon, trying to jog his own memory.

The animation technique is very striking, but not in such a way that this starts turning into a tricksy film where you marvel at the style. You never lose track of this being a real film about real, terrible events. There is a bit at the end which has attracted some controversy, where the film suddenly switches from the animation to news footage from the time of wailing women and scattered corpses. Other people are less fond of bit of the film, but I found it very effective. If I had witnessed such events, or, like the film maker, played a part in them, I think my memory would try to bury them for me. It is also useful to include the news footage to remind viewers that the events in the film actually occurred - younger viewers or those who do not actively follow Middle Eastern affairs may have never heard of the massacres before.

As you know, I holidayed in Lebanon in 2002. This was 20 years after the events it describes, but I was struck by how familiar the Beirut scenes looked. Even in 2002 you would still get the occasional poster of Bashir Gemayel* in East Beirut. And that brings me to an odd thing, only tangentially related to whether the film is any good or not. The titular waltz with Bashir is a scene where an Israeli soldier takes a heavy machine gun and dances in the open, blasting away at mystery assailants, underneath a huge poster of Bashir Gemayel. But the film is very specific about where this event takes place - at the junction of Hamra Street with the Corniche, at the heart of West Beirut. There is no way in hell there was ever a giant poster of Bashir Gemayel in that part of West Beirut**; it would be like British soldiers meeting a giant poster of Ian Paisley on the Falls Road. I find it oddly appropriate that a film about the vagaries of memory would include a scene like this that could not have happened where and when the guy in the film remembers it***.

***I look forward to some "I think you'll find - " comments documenting how it is well known that when the Israelis finally moved into West Beirut they were surprised to find giant posters of Bashir waiting for them.
Posted by ian at 10:03 PM