Like many people I watched some Dr Who yesterday, but it was old Doctor Who from 25 years ago, called Resurrection of the Daleks. This one was about the Daleks (hence the title), who were trying to bust a rather sulky Davros out of jail so he could make them immune to some virus. For plot device reasons they were storing samples of this virus in a disused warehouse in London's docklands, connected to their space ship by a "time corridor". The Doctor manages to defeat the Daleks (obv.), but his annoying Australian companion Tegan Jovanka decides she has had enough time travel and leaves. 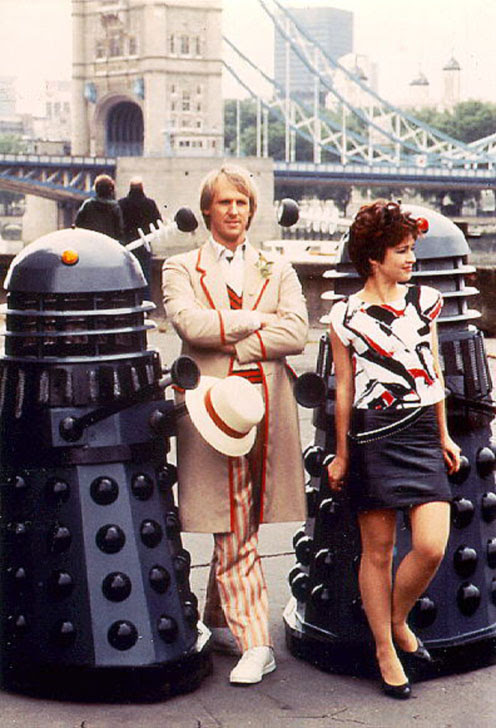 One of the most striking things about the story was Tegan's rather outlandish costume. It may have been the kind of thing that young ladies wore back in the early 1980s, but it did lead to ongoing "WTF?" reactions every time she came on screen (see image; Tegan is the one to the right). There was an accompanying bonus feature in which then Dr Who producer John Nathan Turner and Janet Fielding (who played Tegan) appeared on some early morning breakfast programme (itself a fascinating relic of the early 1980s). JNT confirmed that the rather revealing costumes the lady assistants wore were primarily designed to appeal to any dads who might be viewing.

Email ThisBlogThis!Share to TwitterShare to FacebookShare to Pinterest
Labels: Doctor Who, television

My memory of this is: first episode brilliant, second episode well directed but strangely uncompelling. Yes/no?

The DVD shows it in four parts (as it was made, but not originally broadcast). I think you might be right, in that it does start well and maybe loses some of that excitement. Having said that, I always get very tired towards the end of any DVD I watch, so that could be it as well.