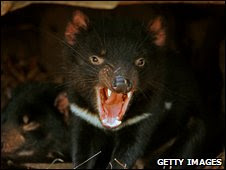 Tasmanian Devils are very fierce animals whose very fierceness has put them in terrible danger. They spend a lot of their time biting and snapping at each other, but unfortunately in so doing they transmit a terrible disease which causes their faces to erupt in repulsive cancerous growths that eventually make them unable to see or eat, leading to their death by starvation. Scientists have projected that their complete extinction in the next five or so years.

I have previously mentioned how some hope had emerged following the discovery of Cedric, a Tasmanian Devil who appeared to be immune to the facial cancers decimating his kind. Scientists had hoped that they could discover the secret of his immunity, or use him to repopulate the world with his cancer-immune progeny. Sadly, these hopes have now been dashed. Cedric recently developed some of the tumours on his face. Scientists have tried to excise them, but they do not hold out much hope.

Professor Greg Woods of the University of Tasmania has said that the results are "very deflating, very, very disappointing. There really is only one thing that can save the Tasmanian Devils now - they must stop being so fierce".

I AM STILL THE FIERCEST TASMANIAN DEVIL IN THE WORLD! RARRR!