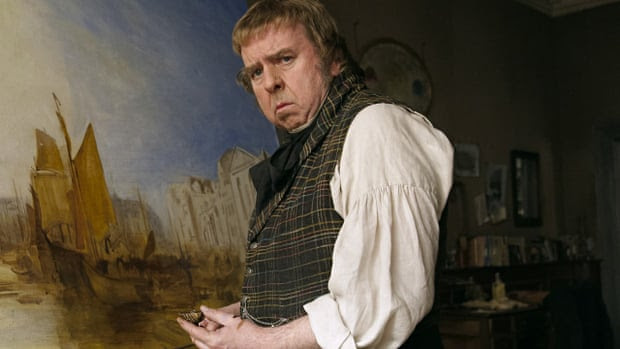 This is a Mike Leigh film in which Timothy Spall plays the well known 19th century artist J. W. M. Turner. It tells the story of the latter part of his life. It looks great and has some great scenes and performances but overall it is not brilliant. It lacks a narrative thread and seems to be just a sequence of events. Turner's inner life is largely unexplored. Instead we see him being casually exploitative of his housekeeper and needlessly cruel to the mother of his daughters (born out of wedlock), yet he is capable of genuine tenderness with another woman he ends up forming an attachment to.

I find with the less successful Mike Leigh films I end up wishing the entire film had been about one of the minor characters. With Happy Go Lucky I wanted an entire film about the uptight driving instructor (even if "uptight driving instructor" is something of a lame cliché), while with Career Girls it was the Welsh flatmate who needed to have his story told. In this one, it was the personally difficult and unsuccessful other artist whose story seemed more interesting (if also more miserable) than that of Turner himself. Or perhaps a film about Ruskin, who appears briefly here with the actor capturing the man's strange mix of punchable ponciness and impressive critical sensibility.

Still, the film has much to recommend it. You do get a sense of how mid-19th century art did seem to be moving towards stylised and abstract forms that were then abandoned until the 20th century. The evocation of the period generally is very vivid. And as noted above, there are great performances here. Spall shines as Turner, even if the man remains a mystery. Also impressive are Dorothy Atkinson as his housekeeper and Marion Bailey as the widow with whom he strikes up a relationship. And although she only appears in a short scene and has almost no lines, I was struck by Kate O'Flynn as a prostitute Turner visits and sketches in a brothel; her face was wonderfully communicative of a sense of contempt for her clients, though she may also have stood out in a film otherwise mainly featuring older actors.

I was also amused by how every time we saw the exterior of Turner's house, the same gentleman was walking by with his dog.