Where was I on the last October Bank Holiday weekend, a full year after the last Hunters Moon festival? It would have been great if I had been in Carrick-on-Shannon, hanging out forlornly outside the Dock and wondering when when the festival was going to start, perhaps making my way to some of the coffee shops or the church looking to see if anything was going on there. But I was not, I was up in Sligo, a bit further along the same train line. As you know, Sligo is the town where my beloved is from and that weekend they were having a load of concerts and stuff on under the general rubric of Sligo Live or something like that. As well as local acts and artist well-known in Ireland if not outside they also had some actual big names (Sheryl Crowe!).

I was not in Sligo to see Sheryl Crowe, I was there to see Irish trad rockers Horslips with my beloved and her sisters. They were playing in the sports hall of the Sligo Institute of Technology. They were supported by Moxie, a local band who also combined trad and rock elements but did seem to come down more on the trad-folk-raggle-taggle side of the coin. They were at least half-decent and I would not object to seeing them again and they were clearly well-liked by the local crowd.

Horslips themselves… well they might be one of those bands who are much better known in Ireland than without. The strode the 1970s in Ireland like a colossus. If you see old photos of them they look amazing in their hairy hippy gear, quite a contrast to the by then tired look of the showbands who were still anachronistically active on the Irish scene. They were massively popular in Ireland, maybe not so much in the UK (correct me if I am wrong, readers), though they did apparently have top ten hits in traditionally hibernophile Germany. As previously noted, their music mixes rock and Irish traditional music elements, with lyrics also often calling to mind Celtic mythology. To be honest, I am not actually that familiar with their music but have liked what I have heard and have long been curious about them, so I leapt at this chance to see them live. 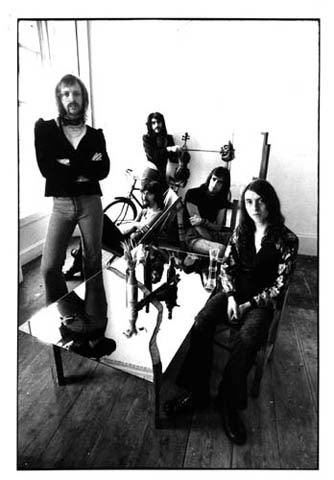 As far as I know Horslips are one of those bands who split up because their appeal had become more selective rather than because they all hated each other. So although they have all gone onto have successful non-musical careers there was no real barrier to them getting back together again and they have done so in recent years for high profile and doubtless fairly lucrative gigs. They had the complete 1970s line-up tonight for us, apart sadly from their original drummer, Eamon Carr, the only one of them I would have recognised. It was quipped that he was away getting ready for Halloween; if you have ever seen a picture of him you will know what she means.

Now, when you have a band made up of people who have all somewhat drifted away from music you would have to worry that maybe live they will be a bit rusty and rough around the edges. When they started off I did spend the first song or two wondering whether I had made a terrible mistake in coming to see them, as the songs seemed little above the level you would expect of an uninspired bar band. But a few songs in they started rocking out properly and also sneaking the trad elements into their tunes, reminding us of their unique selling point. And then they switched to the beautiful slow tune 'Furniture', a song I have heard described as the Irish 'Stairway to Heaven'. I think that might have been the moment that this concert tipped over from being quite good to being amazing. Normally I hate anything that might be characterised as a Lovely Song, but there is a poignancy to this tale of love gone wrong.

The set rolled on like a juggernaut, finishing with a pre-encore double whammy of 'Trouble with a Capital T' and 'Dearg Doom'. The latter is from a concept album based on the Irish hero saga of the Táin Bó Cúailgne, with the lyrics being the taunt of Cú Chulainn before he goes into combat. These are both monster tunes, particularly 'Dearg Doom', each with killer openings instantly recognisable to anyone in my country. They then encored with 'Shakin' All Over', a cover of a song by Johnny Kidd and the Pirates (yarrr), which seems to be their party piece.

I came away from this fired up with Horslips-love. I would definitely go and see them again and I encourage anyone reading this to seek out their music. The Book of Invasions or The Táin might be the records to go for, or maybe Happy to Meet, Sorry to Part being the one to listen to if you want something more contemplative.

Horslips will knock the lugs right off you (Horslips official)

".. each with killer openings instantly recognisable to anyone in my country."

(or specifically, citation that the millions of people who do know Dearg Doom don't think it's played by Jack Charlton)

I meant that all true Gaels know the intros, though they may not know the songs they come from. Dearg Doom from the World Cup song, Trouble from GAA.