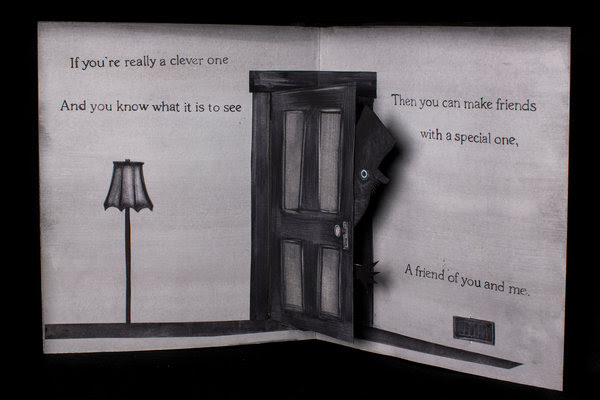 This is an Australian horror film. It is about a widowed mother and her troubled young son, who is obsessed with the idea that monsters are going to come and get him while he sleeps. His fears keep his mother awake at night and for much of the film she is in a sleep-deprived state. As someone blessed by an inability to sleep properly I empathised with her.

The film undergoes a transition when the son finds a storybook in the house about the Babadook, some kind of monster that comes for people when they sleep. The book has no author information but the illustrations seem to be about the mother and her son. And the book seems to change, with more text and illustrations appearing on hitherto blank pages. Nevertheless the film preserves an ambiguity as long as it can as to whether the whole business is just the woman suffering a breakdown triggered by sleep-deprivation or whether they are actually being stalked by a strange monster (spoiler: they are).

As a horror film, this is very effective. Without the use of jumps or things leaping out at you, it manages to communicate a sense of terrible dread and unease. At one point the film had me so on edge that I was genuinely wondering why I was putting myself through this kind of wringer. Light, sound, and a suburban house that mutates into a gothic mansion all work together to create an atmosphere of palpable evil. The ending is unusual, though. Without revealing the terrible secret, it does not end with the horror defeated or the horror triumphant; rather there is a strange accommodation reached with the demonic force.