It does sometimes seem like it is taking me longer to write about my life than to live it. This is an account of something I went to last Halloween in the Joinery, a local music and arts venue which has since closed down as part of a general erasure of things I like from the world. The event was organised by the Deserted Village record label, which is run by and releases records by people I think of as part of the Hunters Moon world. First up on the bill was Katie O'Neill, who had already started when I arrived. She played interesting textured guitar music. 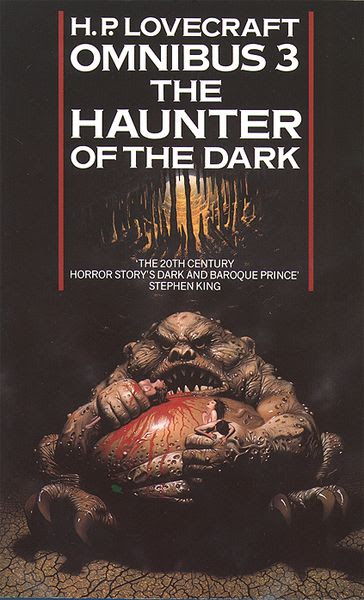 The star act of the evening for me was a collaboration between Suzanne Walsh, Brian Conniffe and Diarmuid Mac Diarmada. If you were a hater you might describe this as artwank bollocks but I was in the zone and enjoyed it greatly. There were electronic elements to it as well as the playing of analogue instruments but the particularly amaze feature was the vocal performance of Suzanne Walsh. She was reading from the Grafton Paperback H.P. Lovecraft anthology The Haunter of the Dark, the one with the giant humanoid eating naked women on the cover, and singing Lovecraft's words to us. Or at least, that is what it looked like she was doing, except that I have read that book and number of times and the words did not sound familiar. Aside from Ms Walsh's wonderful presence, what made this performance was the strange and ritualistic nature of it, perfect for a concert on Halloween.

The last act were Tarracóir. I saw them once before, at Hunters Moon 2012, when they played unbelievably hard-rocking music in a tiny café. This time they had a different line-up because their brilliant drummer Bryan O'Connell was unable to make the event, so they replaced him for the night with one Tuula Voutilainen on crazy lady vocals. This was also bizarre and challenging and not the kind of thing that is ever going to trouble the charts but all forward thinking people enjoyed it.

And that was that. There were later concerts on in the Joinery, before it closed, notably a reformation of odd 1990s Irish band Wormhole, but I did not get to any of them. And now this great venue just a round the corner from my home is gone.

The Haunter of the Dark (The Internet Speculative Fiction Database)
Posted by ian at 1:28 PM