I went to York. I went to see plays. The people that run Shakespeare's Globe in London were touring performances of Shakespeare's three Henry VI plays to places in England that are significant to the action within them (including to some of the battlefield sites). York is significant because one of the big battles takes place near to it, with the loser's head ending up stuck on a pole over the city walls.

Although the plays are known to us now as Henry VI Parts 1, 2 and 3, they were not written in that order and were not conceived as a trilogy. And they were only given those titles retrospectively by some posthumous publisher of Shakespeare's plays. It seems that our Parts 2 and 3 were performed first, with titles something like The Houses of York and Lancaster and The True Tragedy of the Duke of York. Our Part 1 was written later, as Harry the Sixth, for a different theatre company, to tell the early years of the reign of Henry VI (who ascended the throne as a young child on the early death of his father). This makes it one of history's first prequels, with all that that implies.

The first play is mainly about the loss of the English empire in France as bickering nobles fail to assist the brave fighters there against the treacherous Frenchies, who have managed to enlist the aid of one Joan de la Pucelle, a young woman in league with satanic forces. The play has great bits in it (the Joan of Arc scenes, the heroic English fighters in France who are blatantly maniacal nutters, a worldly bishop, a scene where it is ponderously explained to Richard of York that he is actually the rightful king of England, etc.) but it seems to be one of those plays were loads of things happen without there being any real narrative thread. Strangely, this seems to have been the most popular of the three plays back in Shakespeare's time, with the story of the loss of the French empire and the death of heroic figures like Talbot (a blood-crazed thug) having audiences weeping in the aisles. 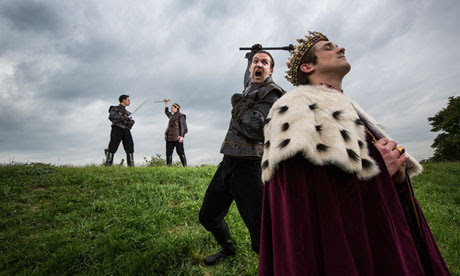 In the second play, the feuding of the English nobles explodes into vendetta and then open conflict. Richard of York stakes a claim for the throne, backed by some powerful nobles. He also has his sons behind him, with the thrill power ramping up considerably once this trio of badasses appears. He is opposed not so much by the King, a saintly figure a bit too prone to simpering, but by the King's wife and various other nobles. They all lay into each other in a series of battles. York, an ambiguous figure, also causes trouble by inciting a mob of revolting peasants to descend on London and murder anyone who can read, Khmer Rouge style.

It all turns into a bit of a bloodbath, with various nobles murdering each other and then being murdered themselves by their victims' friends and relations. One of the grimmer scenes is the one in which Richard of York is humiliated and tortured by the Queen and her associates, before being beheaded (it was his head that ended up on a stake on York's' walls, over a guardhouse near to where I was staying). 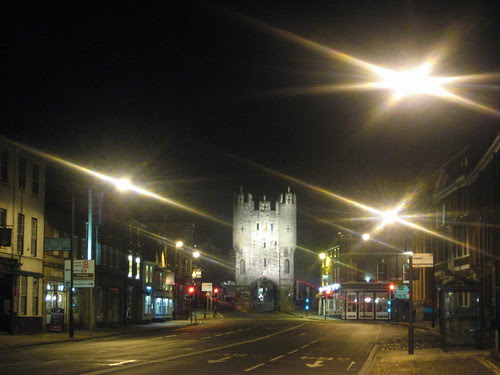 By the end, Richard of York's son Edward is reigning as King Edward IV, largely because everyone else is dead. Well, his two shifty brothers are still alive but one of them has changed sides so often that no one could take him seriously. And the other (Richard Jr, Duke of Gloucester) - well he is a deformed hunchback so there is no way he could be plotting to engineer everyone's death so that he can become king, right? So all is well, kind of like at the end of a game of Family Business when peace reigns because the graveyard is full.

The portrayal of Gloucester, the future King Richard III, was interesting. In the Globe last year I saw a performance of Richard III, the play that depicts his final rise to the throne and brief but bloody reign. Mark Rylance played the part of this great Shakespearean villain in a manner reminiscent of Derek Jacobi in I, Claudius, someone using physical disability as a mask, in this case to hide his lust for power. In the last two parts of Henry VI, Simon Harrison plays the younger character as a creature of pure malevolence. To a modern viewer, however, the continuous jibes he receives about his twisted form are strikingly unpleasant.

With our more enlightened views of such matters, it seems hardly surprising that someone subjected to such abuse would develop a warped character and a general hostility to the human race. I think perhaps this is what makes Shakespeare's character oddly sympathetic to modern viewers. He is a violent and malevolent creature, to be sure, but with a modern mindset we can see him as made like that by society rather than cruel fate. And with the hostility he has had to endure from his fellows on account of his form, he makes for a perfect outsider anti-hero.

If you have ever been to the Globe in London you will know that music is a big part of the way their plays are presented, with musicians playing before the performance starts and then accompanying the dance of the actors that happens at the end. With these performances the music was a bit stripped down, perhaps because it was a cut-price touring production. Any music in the play was made by the actors themselves. This was either percussive (good for the military stuff) or made by scraping the edge of something to create strange disconcerting droning sounds. The latter in particular sounded almost electronic. Perhaps because the plays were being performed over one day, making them seem like one monster play, they left the actors' dance to the very end.

These plays are on over the summer in a number of places, including back in London. I encourage you to see them, ideally all in one day for the fully immersive experience. If that sounds like too much, you could skip Harry VI, and if you reckoned one would be enough then I say to make that one The True Tragedy of the Duke of York.

Seeing these plays has also got me thinking about other theatre marathons that would appeal to me. One thing I would love would be if someone could stage all eight of the Plantagenet plays (dealing with the reigns of Richard II, Henry IV, Henry V, Henry VI and Richard III) over, say, four days with two plays a day. Another obvious one would be the Oresteia of Aeschylus, the only surviving trilogy of plays from ancient Greece. That one deals with a terrible cycle of murder and vengeance within the kind of dysfunctional family that is so common in Greek tragedy. A performance of all these plays in one go would make for a fascinating theatrical experience.

These plays are being performed in the Globe and around England and Northern Ireland, sometimes in places of relevance to the occurrences depicted, including battlefield sites. See if they are playing near you here.

Shakespeare on the battlefield: the Globe theatre step out - a piece in the Guardian on the battlefield staging of these plays, with particular reference to Towton, the bloodiest battle ever fought in England. The illustration of Henry VI and the three sons of the Duke of York are sourced from here.