The Lion-Dog of China 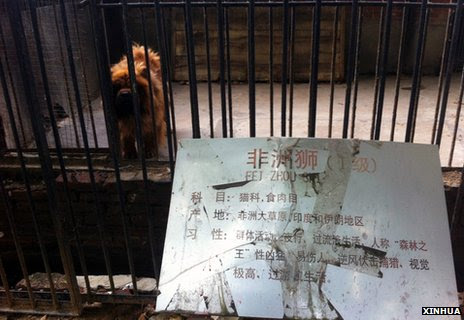 Visitors to a Louhe city zoo in China's Henan province were looking into the cage labelled "African lion", perhaps thinking the beast inside was smaller than expected, when the animal astonished them by making a noise. However, instead of making a majestic roar, the cage's occupant let out a bark. Investigations revealed that it was not actually a lion, but a Tibetan mastiff, a large and hairy breed of dog, whose head hair could perhaps be mistaken for a lion's mane if you had only ever read descriptions of that fearsome feline's proud coiffure. The zoo's lion had been taken away to a breeding facility and the mastiff placed in its cage because of "safety concerns".

Elsewhere in the zoo, another dog was in an enclosure labelled as a wolf, while a leopard's cage was found to contain a fox.

For all that this is basically being presented as a comedy story, the grim-looking cage shown in the picture, coupled with the falling apart sign, suggests to me that this is one of those zoos based on earning a quick buck from animal cruelty. I hope it is shut down and its inmates moved somewhere nicer, released back into the wild (where appropriate), or else humanely killed.