D is for Dengue Fever

Dengue Fever are one of those bands I was fascinated by long before I actually heard anything by them. You may recall that I developed an interest in the music of Cambodia from before the rule of the Khmer Rouge, largely through one article I read in a magazine somewhere and then a Sublime Frequencies record called Cambodian Cassette Archives. It was then fascinating to learn that there was this band Dengue Fever out there who were playing this music again and I yearned to see them live and hear their records. And eventually I did.

The story of Dengue Fever is that they were formed originally by two brothers, Ethan and Zac Holtzman, who had become fascinated by Khmer Pop. In LA's Little Phnom Penh they found Chhom Nimol, an amazingly voiced star of the local karaoke scene, and so they recruited her and a load of other talented musicians into the band. 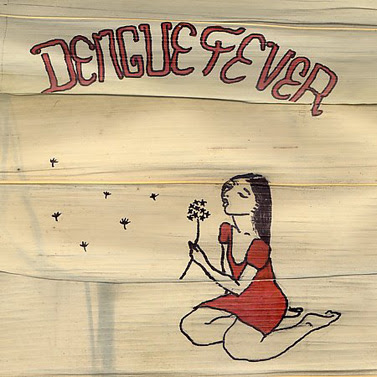 Their first album sees Ms Nimol singing covers of Cambodian classics largely unheard of in the west at the time - tunes originally sung by the likes of Ros Sereysothea or Pan Ron. On one or two tracks Ethan Holtzman lends his voice to a song by Sinn Sisamouth, the male legend of Khmer Pop. The vocals are all in Cambodian (or Khmer, or whatever language they speak out there), though the song titles are translated. The musical accompaniment is a bit more surfed up than the vintage recordings would have been (though not as much as you might think - the 1970s singers would often have been accompanied by local beat groups).

There are a couple of stone-cold classics on this. 'I'm Sixteen' is a floor-filler with a degree of call response between Nimol's lead vocals and Ethan Holtzman's backing. 'Shave Your Beard' has me wondering if the lyrics may be new, as the title would seem to reference Ethan Holtzman's amazing facial hair, but it is a slower and more contemplative tune than the floor fillers seen elsewhere. There are many other great tracks here, but the real winner for me is 'New Year's Eve', which starts slow and then turns into an irresistible explosion of frenetic energy. When I saw them live in London they saved this one till very late in their set, and the place erupted when the switch happens. To hear it is to love it.


There is also, for no obvious reason, a track called 'Ethanopium' that is basically an instrumental cover of 'Yègellé Tezeta' by Mulatu Astatqé. I guess the Holtzman's world music interests must run widely.

My review of the Cambodian Cassette Archives record