I saw this ages ago but for some reason it has popped back into my head. It is a film set in the Democratic Republic of Congo (or Dr Congo as it likes to be called). It is about this guy Riva who is a gangster character, but one who likes to play by his own rules. He takes no lip from people in authority, whether they are gang bosses or the forces of the DRC's near non-existent state. This ultimately proves to be an unwise move on Riva's part. 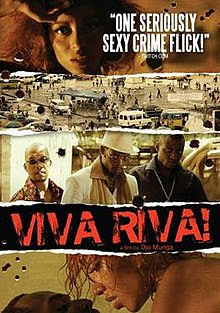 This is basically a blaxploitation film, albeit one set in the DRC rather than an American inner city. Riva spends the film thinking he is Superfly, and in fairness he is a pretty stylish and suave fellow, oozing in charisma. But he turns out to be Freddy, someone in way over his head and lacking the smarts to play with the big boys. The plot sees him piss off two violent criminals. Before the film has even begun he has double-crossed a terrifying Angolan crime lord. This allows Riva to live the flash life in Kinshasa, but he seems not really to have much of a plan for what to do when the Angolan comes looking for him. And then, almost as though he reckons he has not got enough enemies, Riva starts trying to seduce Nora, the ladyfriend of a local gang-leader. In fact for the first part of the film we largely see Riva trying to hook up with Nora, while the film keeps cutting away to the Angolan and his men drawing ever closer to him.

Riva is basically a bit of a dick. When he is not pissing off people who could have him killed, he is luring an old friend away from a settled domestic life and back into a life of crime. Or he is hanging out in the most bizarre brothels I have ever seen (…represented in films, obviously). In contrast to Riva, his idiot friend, or the various terrifying gangsters he is up against, it is the women characters who seem far more appealing here. This is true whether we look at Nora, or the wife of Riva's old pal (who delivers a powerful embittered speech at Riva late in the film), or the army officer that the Angolan obliges to join the hunt.

The film has an almost Hamlet-esque body count, with very few of the main characters being still alive when the end credits roll. I am curious as to whether the makers expect us to think "Riva is cool!" or if we are meant to see him as a cocky moron who sowed the wind and reaped the whirlwind. Either way, the film is enjoyable in a flashy way but I found the amorality and essential despicability of its protagonist a bit wearing.