v/a "Rebellion by the Letter" 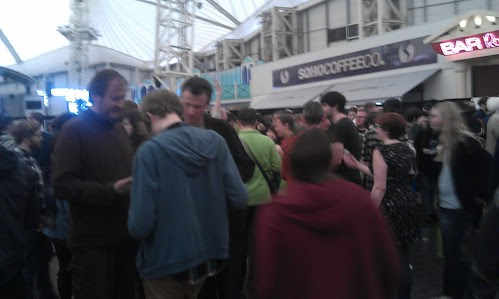 This is an acrostic compilation for the ATP festival, except that instead of making an acrostic of his own name the compiler (one Rick Fame) has picked out tunes that spell out the rude message "Fuck the Rules". Well I never. There are a lot of great tunes on this, perhaps with a bit of a bias towards US tunes of the broadly hardcore variety (not that I would know). Or so it is for the first few tracks. But there is also an amazing track called 'Cheesecake truck' by King Missile, with lyrics about how the singer got a job delivering cheesecakes in a truck, only he then ate all the cheesecakes. Burr burr burr.

There is also a track called 'Gonna Rob The Spermbank' by The Ex, only I suspect that it is a different Ex to the one we know and love (and least I hope it is). I also like the secret bonus track (a cursory amount of research reveals to be 'National Shite Day' by Half Man Half Biscuit). Overall it is a rather enjoyable collection and I intend to listen to it some more times.