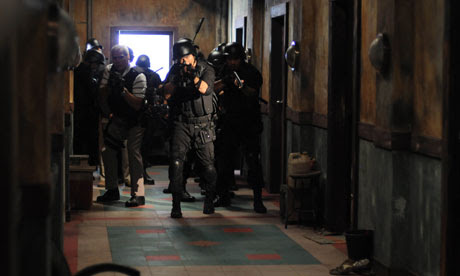 This is a film some heavily armed policemen who go on a raid. Some sinister crime lord lives at the top of an apartment building full of armed badasses and the cops go in to take him out. Initially things seem unproblematic - the crime lord's underlings seem at first to be people who failed the Imperial Stormtrooper entrance exam - but then things go badly wrong and the cops are soon fighting not to capture the crime-lord but to get out of the building alive. As well as blasting away at each other with machine guns, the cops and the criminals are all martial artists and so also spend a lot of the film beating the shite out of each other in a rather intense manner. It is all very relentless and has the high adrenaline feel of an action-oriented computer game, barely slowing down from the moment things start going wrong for the cops. It is probably the best action film I will see this year.

One odd feature of this film is that it is directed by a British (Welsh) director but features all Indonesian actors and is in the Indonesian language (according to the IMDB; I was a bit surprised to learn that there is a single Indonesian language). I gather an English language US remake is on the way, where they will presumably edit out the strength the main cop character gets from his Muslim faith.