The True History of England 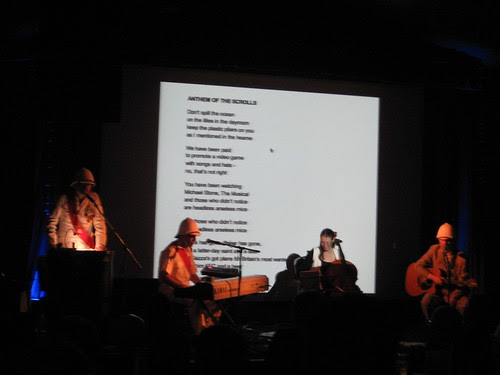 And we went to a performance of the North Sea Scrolls. Or a concert-lecture experience at which the contents of the North Sea Scrolls were discussed in words and song. These scrolls, discovered in the North Sea or thereabouts, reveal the true history of England in the recent past. They were revealed to us by Andrew Mueller (sometime music journalist, famous as the only one of his kind to like Toasted Heretic), Cathal Coughlan (formerly of Microdisney and the Fatima Mansions) and Luke Haines (formerly of the Auteurs, Baader Meinhof & Black Box Recorder), all clad in colonial garb and pith helmets. They also had a woman with them to play cello, but she wore normal clothes and may not have been a prophet in the same way they were.

The night went like this. Behind the musicians a photograph would be projected. These changed for each song. Examples of pictures featured included the following:
- Jimmy Saville introducing Frank Bruno to the Yorkshire Ripper.
- King Zog of the Albanians
- soldiers marching through a desert carrying a huge picture of some guy
- a Pearly King
- Emperor Jean Bedel Bokassa I
- many more (see my Flickr page for further details)

Andrew Mueller would then introduce each scroll, revealing the astonishing revelations it contained (who would have thought, for instance, that the last round of the Northern Ireland conflict had been kept since the early 1970s by Australian tribute acts? Or that Ireland conquered England in the 1950s, later installing Martin Cahill as proconsul?). One or other of Coughlan or Haines would then sing a song about the contents of said scroll. Our favourite tune was probably the one about how the occupiers of England recruited Morris dancers as a feared collaborationist militia, the song being called 'The Morris Men Cometh'.

For the encore Coughlan and Haines sang two of their own songs each. I found myself wondering if maybe I should investigate the work of Cathal Coughlan, as he has an attractive crooner's voice and an ironic yet heartfelt approach to lyrics. Haines himself did 'Leeds United', which made me happy, and one from his recent concept album on British wrestlers of the 1970s.

Someone at work asked me whether it all worked. I would have to say it did. The evening featured all new songs and lots of poncey spoken word stuff*, but there was a distinct lack of awkward audience shuffling and muttering or people shouting "Play 'Town to Town', you cunt". This suggests that people were enjoying the challenging nature of the evening, thought the fact that Coughlan and Haines have reputations as hard men may have put people off getting lippy.

*with an amusing and somewhat self-referential joke about the Captain Lockheed and the Starfighters record, too complicated to explain here.
Posted by ian at 5:36 PM