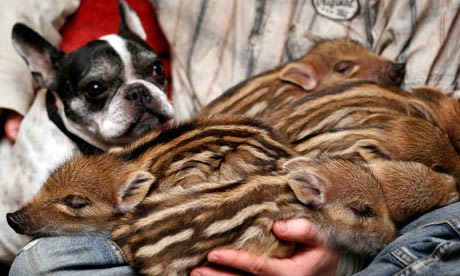 Six abandoned little piglets were recently brought into an animal sanctuary near Berlin. It is thought that some prick who likes hunting had killed their mother. The sanctuary is providing for the physical well-being of the piglets until they can be released into a nature reserve – and Baby the Bulldog is looking after their emotional needs. Baby has adopted the piglets, who are almost the same size as she is, and has remained by their side since they arrived in the sanctuary. "She thinks they're her own babies", says sanctuary employee Norbert Damm.

Baby is apparently a serial adopter, having previously mothered raccoons, cats, and other animals.

An inuit panda production
Posted by ian at 5:46 PM