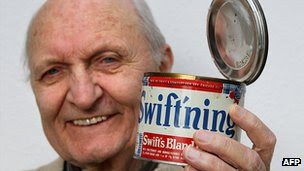 A man in Germany has eaten a 64 year old tin of lard. Hans Feldmeier had originally received the tin as part of an American aid programme in 1948, but put it away for emergency use and forgot about it. When he found the lard again he tested its suitability for human consumption and then ate it all up with some black bread. "I just didn't want to throw it away," said Mr Feldmeier.

Readers may be interested to learn that that the tin in question is of Swift's Bland Lard, the same type of animal fat that appears in the popular Orphanage of Cast-Off Mascots.

An inuit panda production
Posted by ian at 11:12 AM

Email ThisBlogThis!Share to TwitterShare to FacebookShare to Pinterest
Labels: lard

Little bit of sugar and you have slard-a-l'ancienne