This is a year of anniversaries. Later many will mark the 100th anniversary of the start of the First World War. But this year is also the 200th anniversary of the first fall of Napoleon. As the year began, he tried to defend France from an invasion by the combined forces of Austria, Russia and Prussia. By now Napoleon's armies had been devastated by decades of combat - he had lost one vast army in Russia in 1812 and another in the 1813 battles in Germany that brought his enemies to the borders of France. By 1814 he was commanding an army largely composed of press-ganged 17 year olds and was terribly outnumbered, facing half a million enemy troops with something like 75,000 men.

Despite this, Napoleon almost managed to turn things around. With his back against the wall, he seemed to recover his old poise. In February he raced his army around and won a series of battles against the dispersed enemy forces. For a brief moment it seemed that the allies would abandon their attempt to seize Paris, but their nerve held and they continued their advance. Napoleon tried to lure the allies away from the capital, but they pressed on and seized it on the 31st of March. 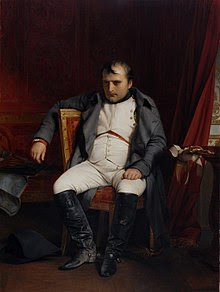 Napoleon then proposed to lead his army against the occupiers of Paris, but his war-weary marshals mutinied, refusing to lead the army against France's capital. The revolt of the marshals eventually convinced Napoleon that the game was up. He entered into negotiations with the allies and unconditionally abdicated on the 12th of April. He then attempted suicide, but the vial of poison he had been carrying since 1812 was no longer lethal; though he became very ill, he survived.

The allies decided that they would exile Napoleon on the Mediterranean island of Elba. There he would retain the title of Emperor and exercise sovereignty over the island, and would also receive a substantial annual subsidy.

On the 20th of April, Napoleon bade farewell to the Imperial Guard before departing for exile. He addressed his men:

"Soldiers of my Old Guard, I bid you goodbye. For twenty years I have found you uninterruptedly on the path of honour and glory. Lately no less than when things went well you have continuously been models of courage and loyalty. With men like you our cause was not lost; but the war could not be ended: it would have been civil war, and that would only have brought France more misfortune. So I have sacrificed our interests for those of the Patrie. I am leaving you, my friends, are going to go on serving France. France's happiness was my one thought; and it will always be what I wish for most. Don't be sorry for me; if I have chosen to go on living, I have done so in order to go on serving your glory. I want to write about the great things we have done together! …. Goodbye, my children! I should like to press you all to my heart, but at least I shall kiss your flag!"

It is reported that many of Napoleon's veterans wept as their master delivered this address, as did the representatives of Britain, Prussia and Austria who were present (the Russians were unmoved).

Napoleon then left his army and departed for Elba, expecting to never see France again. 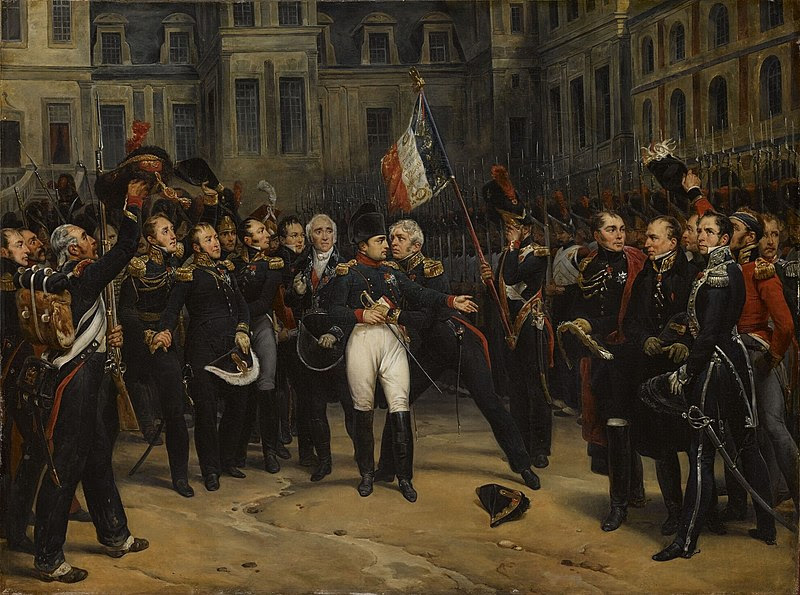 Image source (Wikipedia: an account of the 1814 campaign whose neutrality is disputed; it is the least 'Wikipedia' article I have ever seen on that website, which might explain why it reads so well, particularly the account of Napoleon's farewell to the Guard)