[live] Jaki Liebezeit with Drums Off Chaos and Burnt Friedman

I went to see Jaki Liebezeit, legendary drummer of popular band Can. He was playing in the Grand Social. At this concert the headliners were going to be Jaki Liebezeit and Burnt Friedman, while the support act was Drums Off Chaos, which was Mr Liebezeit drumming with two other guys. Yes, readers, Jaki Liebezeit was supporting himself.

Full disclosure, I arrived at the event after a wine-tasting at work, so I was feeling a bit *relaxed* and so was perhaps not in the best of states to enjoy the music. But Drums Off Chaos were nevertheless enjoyed by me. There is always fun to be had watching serious drummers doing their stuff. I was also fascinated by the way Liebezeit, like other ageing heads from the German 1970s music scene (e.g. Ralf Hütter and Michael Rother) seems now to have turned into the kind of respectable character who could chat convincingly to your parents about stock options and long term investment yields. He is also older than my parents, but he does not look it. 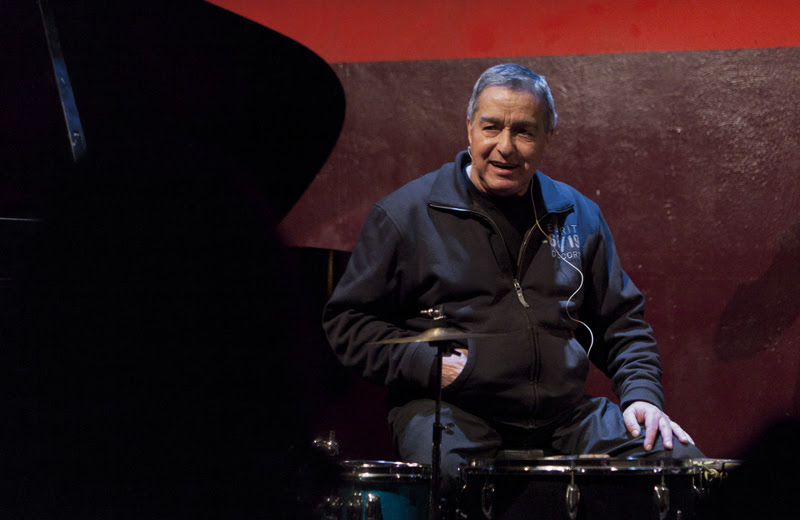 Jaki Liebezeit and Burnt Friedman was Mr Liebezeit drumming and Mr Friedman playing keyboardy synthesiser stuff. My recollection is that it was more angular, with the keyboards being a bit textural and intermittent rather than either melodic or percussive. I fount it quite interesting but I was overcome by a terrible tiredness so I had to slip out of the venue and go home to my bed. Of the two sets, I reckon that the Drums Off Chaos one would be the one that you would rather hear live while the Jaki Liebezeit & Burnt Friedman would be the better listen at home.