Noticing that this year would be the 100th anniversary of the start of the First World War, I started thinking about doing blog posts on the anniversary of key Great War events. Then the idea grew legs and I started thinking about doing more and more posts, ending up that my plan now is to set up a dedicated real time First World War blog to try and pass myself off as some kind of expert in that conflict. The basic inspiration for this would have to be the wonderful @RealTimeWWII on Twitter, only not as comprehensive (it is important to know your limitations) and 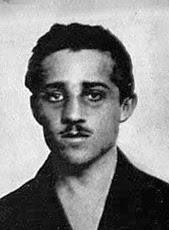 based more around slightly longer but less frequent blog posts. To this end I have started reading more about the First World War, with a current particular focus on the July Crisis. The plan is to start a dedicated real time Great War blog, set to auto-post to a dedicated Twitter account, which will start from roughly Franz Ferdinand's assassination and them, like the real war, peter out.

I have started developing slight cold feet about all this recently, for a number of reasons. The most pressing of these is the realisation that, obviously, other people are going to be doing the same thing. There is already a @RealTimeWW1 on Twitter, live tweeting events in the run up to the big event (recently mentioning the bizarre event in which the wife of a leading French politician shot and killed the editor of Le Figaro, an event whose non-occurrence could have prevented the war). As someone prone to self-doubt and all that, the realisation that I would obviously be one of many people doing something broadly similar makes me concerned that my efforts would be less interesting than theirs, making my Important Project effectively a waste of time. The realisation as to how the Important Project has grown legs and turned into a Very Big Project has also made me increasingly conscious of what a big commitment it all is. But I am not going to stop now. Maybe a year into my Important Project if it turns out that basically no one is reading it I will give up, but for now I will soldier on.

I had some ambitious plans to travel to Sarajevo, either for the anniversary of Franz Ferdinand's assassination or, more likely, earlier in order to take photographs that could accompany a post on the assassination. As I became more and more ambitious I started thinking about perhaps starting off in Belgrade and travelling overland to Sarajevo, like Gavrilo Princip and his colleagues, and then taking the train from Sarajevo to Vienna to see Franz Ferdinand's last uniform in that city's war museum (and then take the train home, because I wuv trains). But sadly it looks increasingly unlikely that any of this will be happening. We have received notice here in Panda Mansions that our lease is not being renewed, so over the next while we will be looking for somewhere new and getting ready to move into it. There have always been a good few things wrong with this particular Panda Mansions and in many ways I have not warmed to it and I do not dread the prospect of living somewhere else. But house-hunting and moving are terribly time consuming and depressing business and I fear that I will need to dedicate so much time to all this that there will be no opportunities for continental or foreign jaunts for quite some time. And if rents are really sky-rocketing as much as they are reported to be then it looks like even after moving I will not be able to afford to travel anywhere.

Before moving I need to get rid of a lot of superfluous stuff, so the charity shops of Dublin may soon be being flooded with CDs by obscure artists no one is going to be that pushed about buying. I will probably get rid of some books as well, possibly even some boardgames. And I may even accept that I will never be playing some of those roleplaying games I have and get rid of them as well. All of this makes me sad. But my misfortunes are minor compared to those of the millions who fought and died in the First World War.

@RealTimeWWII (I cannot praise this one highly enough)

An inuit panda production
Posted by ian at 11:35 PM