This is the Jim Jarmusch film in which Tilda Swinton and Tom Hiddleston are two immortal vampire lovers. As the film opens one of them is in Detroit, working on music and feeling a bit mopey while the other is hanging out in Tangiers with Christopher Marlowe. The Tilda Swinton character (Eve) returns to Detroit to be with the mopey Tom Hiddleston character (Adam). Rather than being the kind of old school vampires who prey on people and suck out their blood, they instead source what they need from corrupt doctors with access to blood banks, though this seems to be as much for convenience as for any love of humanity. 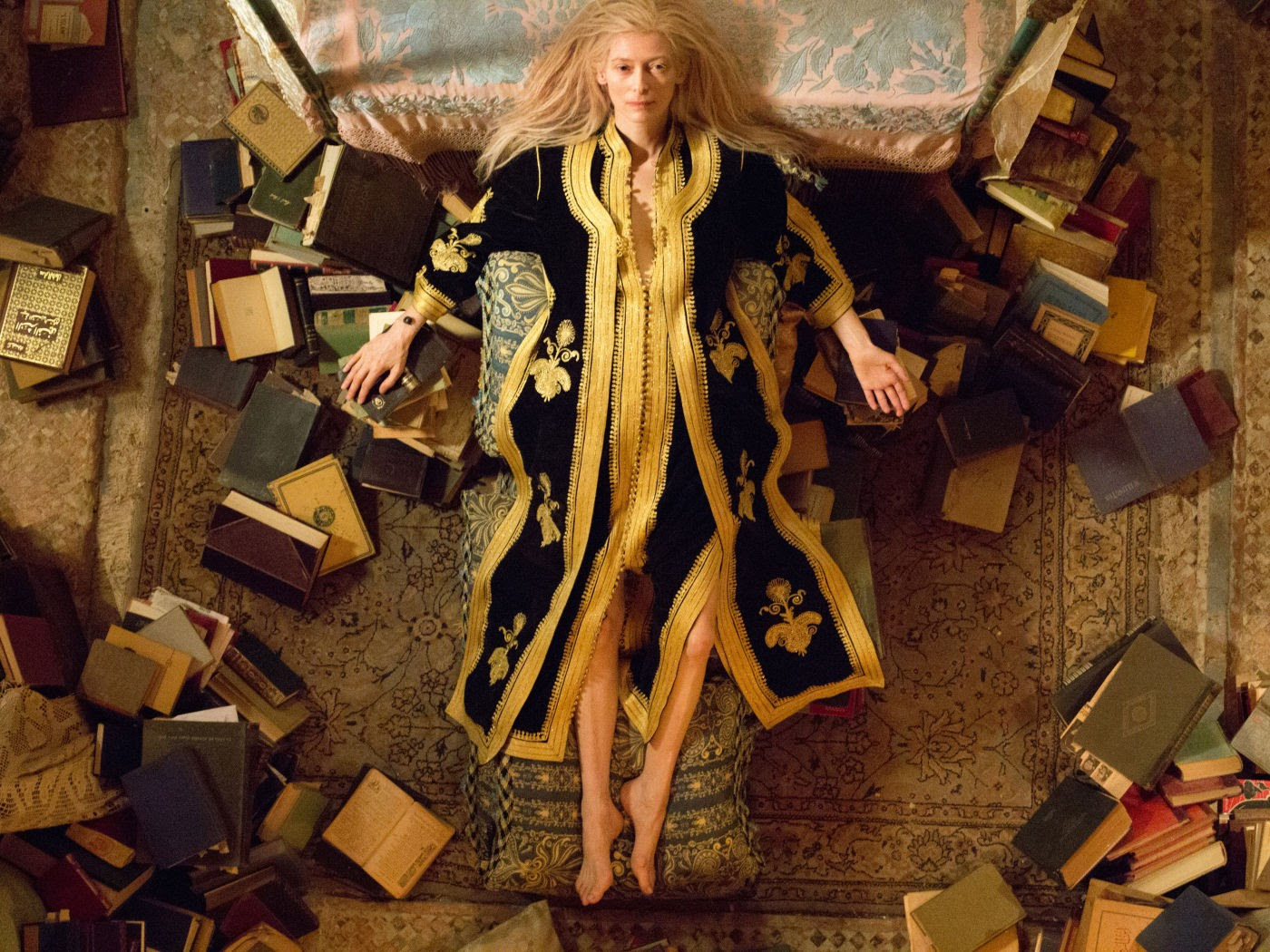 Bad things happen when Eve's sister Ava shows up. She is played by Mia Wasikowska, an amusing bit of casting for anyone who has seen her in Stoker, where deliberate misdirection suggested falsely that there was something vampiric about her and her family (spoilers). Ava is a more wild and careless character than her sister and she fucks it up for Adam and her sister by killing Adam's human fixer (something that to the audience was self-evidently going to happen but which caught Eve and Adam completely by surprise; immortality may not necessarily lead to higher intelligence). This obliges them to hightail it to Tangiers, where the film ends with them on their uppers, attacking two young lovers to temporarily satisfy their inhuman appetite.

The plot is not really what the film is about, though. It is more about the sense of detachment that comes from immortality and the accompanying loss of humanity. This is largely accomplished through shots of Tom Hiddleston looking sad or through tracking shots Detroit at night. Some time ago I saw a documentary about Detroit called Detropia, picking up from it that people from there are a bit hostile to the pornography of ruins thing people attach to their city. Perhaps so, but the city has seldom been better used as a backdrop suggesting the impermanence of human endeavours and the likely apocalyptic future faced by our society everywhere. The lute-tastic score of Jozef van Wissem (amped up here by being played with some metally group called Sqürl) adds to that sense of decay and melancholia.

There are odd features to it all, though. Like where do Adam & Eve get their money from? And why do they have none of it at the end? And can you really fly all the way from Detroit to Tangiers without seeing daylight?

Like Detroit, the Tangiers setting is also well used as somewhere that seems both exciting and interesting but also seedy and the wrong kind of edgy. When Adam & Eve walk the streets there they are continuously offered drøgs from a succession of shifty types straight from the pages of Edward Said (though I was reminded of the first night I spent with friends in the small Moroccan tourist town Essaouira). Against that unpleasantness there is also a beautiful moment when they stumble onto a woman singing with musical accompaniment in a small café, the kind of thing you wish would happen to you when you are abroad.

One thing I did find a bit distasteful was the reaction of some audience members to Ava's killing of Adam's fixer (and not just because, like me, the fixer is named Ian). The sight of his dead body, drained of blood engendered laughter on the part of some people in the cinema. I do not like the tendency of some vampire film viewers to identify with the sad plight of the vampire and to ignore the fate of the people on whom the undead prey. There is a certain reactionary outsider elitism, as they too at some level like to think of themselves as cut off from the swinish multitude with their own deep thoughts and angsts the like of which ordinary people could not even begin to understand.

But you should not judge a film by how some people react to it. Only Lovers Left Alive remains a stunning piece of work and an atmospheric evocation of alienation and emotional estrangement. With its combination of sound, music and visual images it is clearly a masterpiece of cinema and if other Jim Jarmusch films are even remotely as interesting as this I have a lot of catching up to do.

Sad Tom Hiddleston image source (We Got This Covered)

An inuit panda production
Posted by ian at 11:39 AM