[science] Dogs and their understanding of human voices 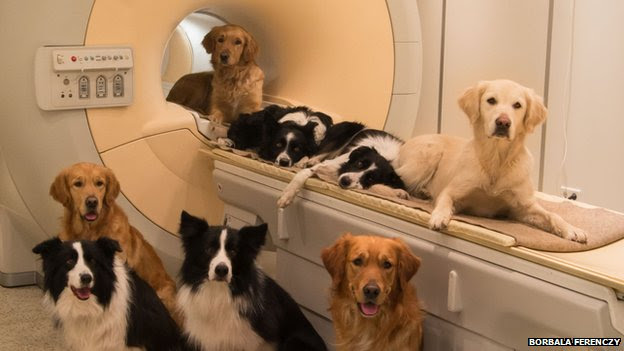 Scientists in Hungary have been investigating how the brains of dogs and humans react to different noises. This has involved training dogs to lie still while undergoing MRI scans. The trainers used positive reinforcement strategies ("lots of praise", says Dr Attila Andics of the Hungarian Academy of Science's Eotvos Lorand University).

The scientists then played a variety of noises to their human and dog subjects. These included dog vocalisations, human sounds and various environmental noises. They discovered that when dogs and humans heard the human noises, in both cases there was activation in the same part of the brain (the most anterior part of the temporal lobe). Furthermore, the activity in human and dog brains was remarkably similar when exposed to emotionally charged human sounds (such as the sounds of laughter and crying).

For other sounds, human and dog brains reacted differently. The human brain responded far less strongly to recordings of dog vocalisations. And dog brains seemed far more engaged by environmental sounds, which is not particularly surprising to anyone who has ever seen a dog excited by a barely perceptible sound off in the distance. 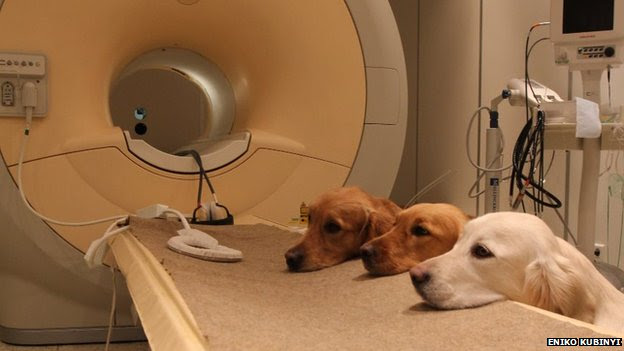 These differences in human and dog responses to other noises make the similarities in response to human noises all the more fascinating. Dogs have of course been selectively bred for closeness to people for a long time now, so it is not too surprising that they would have some sensitivity to human voices. But the apparent emotional engagement with human vocal sounds is rather interesting and suggests perhaps that our canine friends really are able to tell when we are happy or sad.

More (BBC article by Rebecca Morelle, from which come the images)

Even more (Article in Current Biology, so you won't be able to read it unless you have a subscription)

An inuit panda production
Posted by ian at 9:12 PM