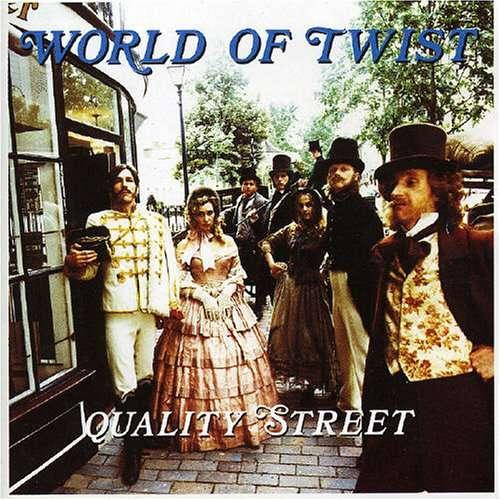 So this is a CD reissue of the classic album by the World of Twist. Oh you know World of Twist, they came in at the end of all that Madchester stuff even though they were not really like that, making music that more sounded like a kind of pop version of Hawkwind (by which I mean they had at least some catchy tunes and wooshy synthesisers). They released just this one album, it did not do that well and they split up. The lead singer fell into heroin addiction and died some years later, as I think did at least one other key member of the band.

Listening to it all again I would have to say that, yes, it is certainly rather appealing but I am not sure that if you played this to one of today's young people they would believe any claims that this was some kind of lost classic. I mean, the music is pretty good, but so is a lot of music. The one thing that this really has going for it is the big song: 'Sons of the Stage'. This is it, a combo of big monster riffs, aforementioned wooshy synths and vocalist Tony Ogden going for it like he is the pop star he dreamed of being. This song is such an instant classic that it is hard to believe it not to be a song you have heard before. Sadly it has been tarnished recently be being covered by Beady Eye (the band of that Liam Gallagher character), but as no one I know likes them you will not have heard their version. To hear the World of Twist version is to wonder how this band did not become all conquering.


Quietus review of reissue of this record (and image source)

An inuit panda production; this post appeared in issue 138 of Frank's APA.
Posted by ian at 7:28 PM