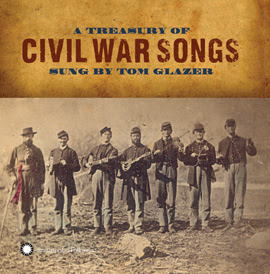 I am well known for my interest in the American Civil War (also known as the War Between The States, The War Of Northern Aggression, The War Where Johnny Yank Took Away Our Property etc.), so I snapped this up when I saw it in Coda Records in Edinburgh. It is a collection of songs from that era given sensitive sing-a-long renditions on this Smithsonian Folkways record. Glazer accompanies himself on guitar and a small ensemble of others join in with other instruments and backing vocals. While well put together, it has a rough and ready quality that goes well with the songs, which would have been ones sung by soldiers or people in their homes rather than by choirs and orchestras. It even-handedly includes rousing political tunes of both North and South, as well as more apolitical songs about the suffering of soldiers.

The Tom Glazer version does not sound anything like this

My favourites here are probably 'The Battle Cry of Freedom' (obv.) and other rousing northern tunes like 'The Battle Hymn of the Republic', but there are other treasures here. I am reminded again what a great tune 'Dixie' is (one tune that I think suffers from not having a huge brass band accompanying the vocals). 'The Yellow Rose of Texas' is another corker, but the real star of the Southern sky here is 'Maryland, My Maryland'. Like many of the tunes on this record, it sets its words to a pre-existing tune, in this case 'Tannenbaum'. The song is an appeal to the good folk of Maryland to rally to the cause of the Confederacy and I recall reading that the marching bands of the Confederates played it when they launched their ill-fated invasion of that indecisive state.

Some of the Northern songs deal directly with slavery. They suffer a bit from being clearly written by white people who had very limited experience of interaction with African Americans. Their tendency to talk about "darkies" also strikes an odd note. But the song 'The Year of Jubilo' has a certain something, with its freed slaves laughing away as their shitehawk of a master has to peg it away at the approach of the Union army.

The most famous song I had never heard before was probably 'Marching Through Georgia', a somewhat fanciful account of General Sherman's march from Atlanta to the sea with his destructive Union army (a march that either broke the back of the Confederacy or prolonged the war with its needless cruelty, depending on who you talk to). The song makes it all sound like a bit of a romp, the army greeted as they go by Georgians rejoicing as they are freed from the iron jackboot of the Confederacy. But anyone with the slightest knowledge of the war knows that Sherman's army laid waste the country it passed through; apart from runaway slaves, I cannot imagine anyone cheering its arrival. I am curious as to whether the composer and people who sang the song knew or cared about the truth of Sherman's march.

So there you go. This record might not be for everyone but anyone with my strange interest in the civil war of a faraway country will find it fascinating. And even if you are not a big fan of the American Civil War, hearing 'Dixie' and 'The Battle Hymn of the Republic' on the one record cannot but put you in mind of Elvis classic 'An American Trilogy'.

An inuit panda production; this post appeared in issue 138 of Frank's APA.