[record review] Neutral Milk Hotel "In The Aeroplane Over The Sea"

This is one of those famous records that lots of people like but which had somehow passed me by. I have had it vaguely on my radar as a record to pick up sometime, my interest piqued partly by the great All Tomorrow's Parties that Jeff Mangum of Neutral Milk Hotel curated. The other thing that had me interested in this record was the range of people that talk about how much they like it, running from the likes of Charlotte Church to my friend K—. 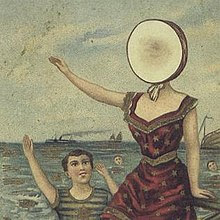 I finally bought a copy in certain well known record shop, one of those famous independent record stores. The owner of the shop is an interesting presence on the internet, with insightful things to say about the plight of the little record shop today so I was curious to see how the shop was getting on.

Sadly, the shop was pretty much as it was last time I was there, several years ago. It feels like a shop about to close down at any moment, with hardly any new stock and a lot of unappealing locking old second hand vinyl albums and CDs in disorganised piles. And what new stock there was did not seem to have any obvious order to its organisation. I know from watching other records stores in decline that they run out of stock, as the record companies decline to supply them with anything for fear they will go bust and leave debts unpaid. Yet with this shop, it seems to have hung on in this strange half-life for years.

While I was browsing around, looking for something, anything I might buy in good conscience another punter came in and picked up the new Mogwai album and went to the counter to pay for it, striking up a conversation with the owner about the state of the record store business. Well, he may not so much have struck up a conversation as asked how things were going, which led to a long exposition on the nature of the business today. I am not sure if this was actually to the taste of the punter, though it was not uninteresting, if broadly similar to the kind of things the record store man says online. Basic summary: record stores are fucked. True enough I suppose, but it is a bit of a downer to have to listen through if you are just popping in to buy the latest kewl album and not something you have to go through when you are buying online.

Anyway, at this point I chanced upon the Neutral Milk Hotel and thought that, yes, I would make the plunge and buy this. So I did. Fortunately the owner's attention was still mainly focussed on the other punter so I was able to quickly hand over my money and scarper with my record and change.

So yeah, the record itself. Well I still have not listened to it too closely, but it is definitely likeable. One thing I did know about it was that one of the other band members went on to form the Gypsy-Balkan-etc. band A Hawk And A Hacksaw, but I was surprised by the extent to which this album nods in that direction. It is by no means a Gypsy-Balkan-etc. record but it has these undercurrents that make it unsurprising that the drummer went that way.

I may talk more about this album in due course, if it does indeed prove to be one of the greatest things ever or just something that is quite good or an album that would only appeal to people who were there at the time.

My beloved asserts that the album is too loud.

Previously on Inuit Panda: A Hawk and a Hacksaw on record and live

Charlotte Church on In The Aeroplane Over The Sea

An inuit panda production; this post appeared in issue 138 of Frank's APA.
Posted by ian at 11:34 AM