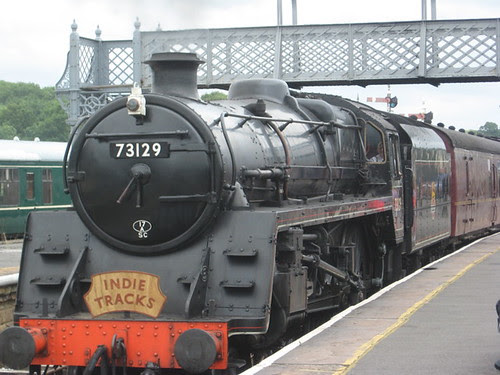 Indietracks is this annual music festival, based around indie pop music. It takes place at the Midlands Railway Centre, a railway museum in Derbyshire (near where the BNP hold their annual garden party). I found myself in attendance, lured along as much by the trains and the promise of all kinds of real ale as the music. I saw a lot of bands, many of whom self-identified as twee in a rather alarming fashion. In general, the music at the festival came from a narrow band, and I found myself primarily enjoying those who most deviated from the no-hoper indie schmindie model.

Let's get the bad bands out of the way first.

Do you remember 1990s band [REDACTED]? They went away, but now they are back! From a musical point of view, it might be best if they had stayed away, as their songs are not really up to much. However, their between song patter is of such an exceptionally high quality that perhaps a future as a successful live band awaits – if perhaps they could just not play any songs and instead treat us to an all patter show. Or maybe they could do the between song patter for other bands, ones whose talents primarily lie in the realm of music.

Another essentially rubbish band were [REDACTED]. Their big song starts off with the 'Be My Baby' drum-roll (as do many songs), then sounds like the start of the Eastenders music, and then it settles down as a knock-off of Tracy Ullman's 'They Don't Know' (itself probably a cover). Baby! Avoid. For some reason their song was being played on every stage between bands. SuXoR.

Now I want to know whose names are redacted! I think I can guess the second one and maybe the first one as well. Dang!

mmmm, maybe I should delete this post... if the bands are that readily identifiable they might read it and then be sad.