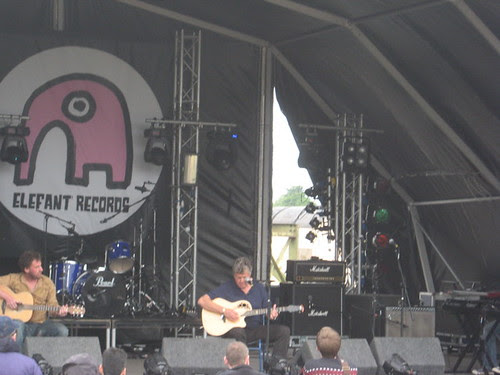 This is turning into one of those boring series where I drone on about bands you've never heard of at some stupid festival I went to. Anyway, outside on the main stage (at Indietracks) I saw Nick Garrie, some folkie fellow from the 1960s. He released one album back then (but only in France), before sinking back into obscurity. Then Rev-Ola re-issued his record (and not just in France), apparently to some acclaim in retro-folk circles, and then he released an entirely new album on Elefant (the Spanish indie label sponsoring the festival).

I was not quite sure what to expect from him, I was thinking we could be looking at some lost folkie mentalist from the 60s, a kind of acid crazed lunatic who had only been coaxed back into the world of music by some sinister psychiatrist of dubious ethical provenance. But in reality perception, Nick Garrie is just some amiable older geezer who seems to have happily moved on when his 1960s musical career failed to take off. So while he seems happy to be playing music again, I did not get the impression that he has spent the last forty years moaning about how he could have been a contender.

Garrie's singing and guitar playing remain impressive, with his set blending old and new tunes seamlessly (mentioning occasionally that some of the old songs had full orchestral accompaniment on record). For most of the time he played largely on his own, with a couple of other musicians backing him unobtrusively.

Garrie was joined later on by some guests. One of these was a fellow I had seen wandering around the festival the day before. With his beardless moustache I briefly entertained the idea that he might be Lemmy from Motörhead, but with his hooded cardigan this seemed somewhat unlikely. When Nick Garrie introduced him, he was revealed to none other than indie legend Duglas (from the BMX Bandits). He helped Nick Garrie out on kazoo chores. 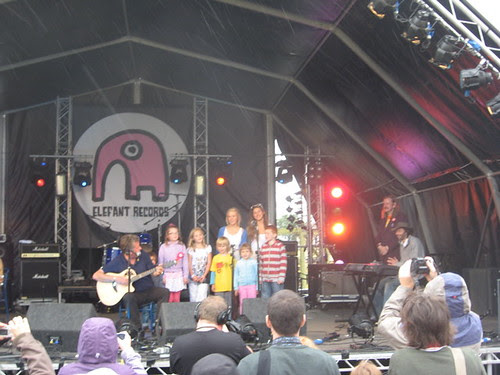 Garrie was also joined by his daughter, her friend, and a load of other children, who provided backing vocals on a song or two. It sounds dreadfully twee, I know, but it was actually quite sweet.

One day I will track down records by Nick Garrie.