One City, One Voice

The Dublin City Library Service has been doing this One City, One Book thing over the last couple of years, where they gamely try to get everyone in the city to read the same book over the course of April. This year the book is Dracula, by Bram Stoker. Dracula is so associated with the cinema that it is easy to forget that it is based on a novel written by a Dubliner.

I am hoping to re-read Dracula this month, though the City Library Service are a bit short of copies. Dracula is an odd book, a strange mix of genuinely unsettling horror and pulpish action. Its attitude to sexuality, particularly female sexuality, is the kind of thing you could base an entire academic career on. While it has its ups and downs, there is something memorably creepy about its best passages; I am thinking in particular of the opening chapters, where the English lawyer finds himself gradually learning the truth about his Transylvanian host, or the various entries in the log of the ship that is carrying the vampire to England. That last section ends with the unforgettable image of a storm-blown ship crashing to shore, the captain lashed to the wheel, a dead man with a crucifix round his neck. 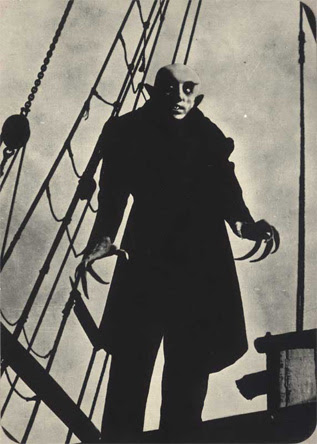 The IFI is getting in on the act by hosting a Gothic film weekend from the 17th to 19th of April. Some of the films they are showing look unmissable. Aside from Murnau's Nosferatu a film that repays endless viewings*, they are also showing Countess Dracula, with Ingrid Pitt (easy tiger) playing Erzebet Bathory, the Blood Countess. They may perhaps have sensationalised the story somewhat, but it is still based on an actual historical noblewoman who actually did bathe in the blood of virgins – can this be sensationalised? The other fascinating film on the programme is Blacula, a blaxploitation horror film; what's not to like?

One somewhat annoying feature of One City, One Book this year is that the Dublin libraries seem to be a bit short on copies of Dracula. Maybe this is the curse of picking a book that people might actually want to read, but there never seem to be any available for borrowing when I go looking for them. Oh well.

More details on One City, One Book

*bizarrely, this has become the film that I have seen the most number of times, largely because I never turn down an opportunity to see it.
Posted by ian at 11:18 PM

I think that's the exact name of our library's annual program too! I've never seen a book I've wanted to participate in reading along with, though. Dracula is an unusual and dark choice!

I was in the library with the kids yesterday, and I've never read it, so I picked up one of the dozen copies they had beside the counter.

Ray - so your library has all the books. Right.

Jennifer - I think this One City, One Book thing goes on in a number of cities, so I reckon that Dublin City Libraries just lifted the idea from somewhere else. Dracula is a somewhat unusual choice, but Bram Stoker is from Dublin, and they have been going with Dublin writers, of whom we have several.