What was that tank?

I went to see The Battle of Algiers again on Wednesday night. This is my second time seeing it. I won't spoil the plot, but there is a bit near the end where a tank appears, or a tank destroyer if you are being a pedant. When I saw the film before hand, I assumed that it was a JagdPanther, given the sloping nature of its fixed turret. Watching the film again, I was not so sure, and started wondering if it was something else entirely. Notably, it looked like it had a T-34 chassis, so I wondered if it might have been some kind of Soviet tank destroyer. Investigation reveals that the vehicle was almost certainly an SU-85 or SU-100, Soviet tank destroyers built on the T-34 chassis. 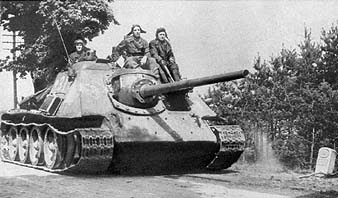 One of the things with The Battle of Algiers is its cinema verité look, with the riot scenes at the end in which the tank appears often being taken as actual newsreel footage spliced into the film's narrative. The appearance of a Soviet-made tank breaks the illusion - the French in the 1950s, at the height of the Cold War, would hardly be using Soviet armoured vehicles, while the newly independent Algerians would no doubt have been able to acquire some antique tank destroyers from the Eastern bloc, and it is surely one of these vehicles that were pressed into service for the film.
Posted by ian at 9:42 PM

Email ThisBlogThis!Share to TwitterShare to FacebookShare to Pinterest
Labels: War