It is actually Sheila & B. Devotion, but i) Sheila on its own is a rubbish name for a singer and ii) B. Devotion is a rubbish name for a backing band. Anyway, Tom Ewing and/or Alex Thomson persuaded me to buy this for 10p once, on the basis that it is a Chic Organization production. And it is awesome, in its own way as epic as LLPJ, with I suppose the greatest moment being when Nile Rodgers' chopping guitar suddenly switches into this mad wistful solo that never once distracts you from the beat. Once again it reminds me of how I wish there was a compilation of the Chic Organization's greatest hits.

You can download the song from here: Boogie Friday's Greatest Hits. There is also a link from there to a site with the video. 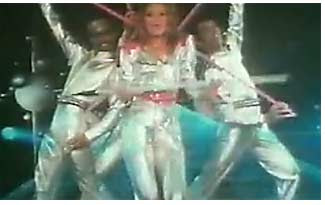 Yeah I had to make my own compilation (entitled hpiou) with Sister Sledge and Sheila B. I also want a Jimmy Jam & Terry Lewis compilation. Ha, I see they did a promo 4 cd set but it costs $300 on ebay. This sort of thing can turn you into a pirate.