HÅXAN: Witchcraft Through The Ages

I went to a showing of this film back in the Dublin Film Festival - sorry, the Jameson Dublin International Film Festival - which was on in February. And I did not take any notes about it so I am going to just ramble away from memory about it. Or, rather, I will just reproduce what I wrote about it in the pages of Frank's APA, because that is how I roll.

And I know what you are thinking, why did I waste time in a music APA shiteing on about some film? Well, there was a lot of music stuff in this one. But let me come back to that side of things later and first of all talk about the film itself. It was made in the 1920s by Benjamin Christensen, a Danish film director. It seems to be mostly set in Germany, because I think that is where the money was. And it is a semi-documentary film, with narrative intertitles that come across like the sensible voice you get on serious BBC documentaries from the past, but with the film having a docudrama quality.

And the subject of the film was... witchcraft through the ages. It showed us a couple of scenes involving alleged or actual practitioners of the Black Arts, largely leaving open the question of whether the witches were deluded eccentrics or people who had actually harnessed obscene supernatural powers. It also has a couple of titillating scenes in which the alleged tendency of young attractive witches to cavort naked is depicted; I gather this proved to be a particularly popular scene when the film was first shown.

So yeah, yeah, what about the music? Well, it was being performed live and the programme promised that it would be performed by the Swedish film composer Matti Bye and his group. Now, live musical accompaniment to silent films can be as much of a threat as a promise. Such things often attract annoying trend people into the audience and the events frequently are over-focussed on the music, which ends up being played at a too loud volume that distracts from the film itself. Well this was not like that. The film being shown at a film festival and being famous in and of itself kept away the true event person (or the music event person), while the music itself was unobtrusive and atmospheric, played on a combination of electronic and acoustic instruments, generally adding to the cinematic experience rather than distracting from it.

But the really exciting thing was that the band included the Finnish Fonal sensation solo artist Islaja. Islaja's own music hovers between the electronic avant-garde and the neo-folky. She brought an element of this to the HÅXAN soundtrack, including the patent Fonal trick of running beads over a microphone to create a random sonic effect. But what for me was most exciting about it being Islaja onstage is that I know someone (not her) who is part of the Fonal world (Fonal being the kewl Finnish record label Islaja records on, keep up!), so therefore by extension Islaja herself is my best friend in the world! Sadly her minders would not let me explain this to her in person.

Back to the film. One part of it talks about witch hunts in mediaeval Germany, with a somewhat exaggerated tale of how one accusation could give rise to a web of arrests as confessions extracted under torture give rise to further accusations until there is basically no one left apart from the inquisitors themselves (who are ducking each other in witch ponds just to be on the safe side). I do not think this is how it worked in practice - while marginal members of the community, particularly older women of precarious financial means, might find themselves accused of witchcraft if someone developed an animus against them, they would be told to shut up pretty quickly if in their confession they were to start incriminating respectable members of society. Or so I understand. 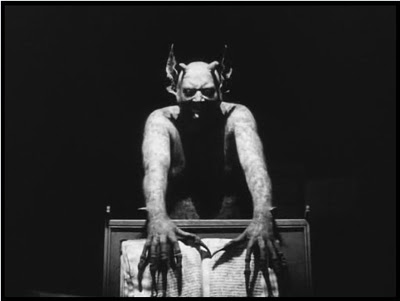 But for all that, the film has a power, both in its depictions of the ostensible beliefs of the witch cults (with the appearance of THE DEVIL HIMSELF at one point being a classic and much parodied cinematic moment) and in the cruel persecution visited on those accused of belonging to them. And it gains a creepy prescience from events that happened after it was made (in the 1920s). All the stuff about historic witch hunts calls to mind the soon-after rooting out of real and imagined enemies of the state in Stalinist Russia and Nazi Germany.

Even more unpleasantly prescient is a scene at the end where the film contrasts the treatment of the deluded in the past with those in the present - in the past such people were branded as witches and subjected to torture and violent death, but now they are packed off to psychiatric institutions. But of course, we know that in the 1930s the Nazis in Germany decided that psychiatric patients were useless eaters and got rid of them in a programme that laid down the template for extermination of Europe's Jewish population. That makes a scene in which a psychiatric inmate is forcibly subjected to a cold shower all the more disturbing.

Image of the Devil (this links to where you can download a copy of the film (it is now out of copyright), but that would not have the Matti Bye soundtrack, which is on the DVD released recently by the Swedish film institute, so go and buy that, you cheap bastard. Or track down a copy of the Criterion release, that apparently has a jazz soundtrack from the '60s and narration by… William S. Burroughs.