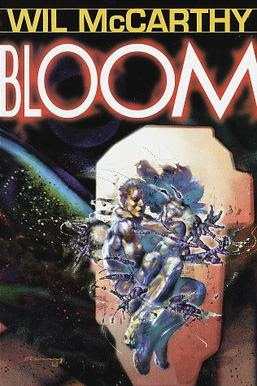 This 1998 novel was our most recent SF book club subject. It is about out-of-control nanotechnology, and is set in a future where an army of teeny tiny self-replicating robots have eaten the Earth. Humanity has escaped to the moons of Jupiter and the asteroid belt, where people eke out an existence and battle continuously against stray bits of nanotech blown up to them by the solar wind. The title comes from the way nanotech outbreaks resemble fungal blooms, with the little robots eating everything they come across and converting it into more of themselves. The characters refer to the nanotech as mycora, from the Greek word for mushrooms.

That's the initial setup. The plot of the book concerns a manned mission sent down from Ganymede to the inner solar system, to drop probes onto the infected worlds. The narrator is an amateur journalist who conveniently finds himself added to the crew. Things happen to transform a routine if dangerous trip into something that bit more exciting. You know the score.

I found this book very enjoyable. Its strengths lie in its ability to evoke the unusual (always a good thing with SF). The future society on Ganymede (and the rather different one on one of the asteroids) are well realised, with the culture shock the Ganymeders feel on arrival in the asteroid particularly striking. Likewise, the book is good on the no fun aspects of being stuck in a tiny spaceship with a load of weirdos for months on end. I also liked the lightness with which the panicked evacuation from Earth was described.

The book really comes into its own, though, when evoking the mycora – the nanotech life that has taken over the inner solar system. When the spaceship flies past the Earth, the crew find themselves looking down at what has become a pulsating mass of mycora. There was something very cinematic about the description, for me calling to mind Tarkowsky's Solaris (as does another scene, one I will not mention as it is a bit spoilery). The book is generally very visual, with the various computer simulations the characters run being easily visible to the mind's eye. I reckon that adapted for the cinema, Bloom would give us some great visual moments.

Maybe less good is the book's occasional lapse into cliché… did the narrator really have to get it on with the sexy lady in the spaceship crew? I could also mention another cliché-tastic twist, but that's a bit too much of a spoiler.

Clichés aside, I recommend this book highly.